Here you’ll find a list of the best new betting sites to launch on the internet. Unlike other websites I still hold these new bookies to the same high standards as the more established ones which means that even though they’re new, they’re not going to do a runner with your money. In many cases they are simply new brands run by existing bookmakers, or a new sports betting section added to an online casino.

Purchased by Kindred Group for around £176 million in February of 2017, 32Red has had a sportsbook of some kind or another since 2007. They sold their first attempt at one to Stan James and ran their second sports site as something of a side project until deciding to revamp it in 2014. That was also the point at which the company decided to integrate the sportsbook with their online casino, the thing that had helped them to gain a reputation as a trustable brand in the world of online betting. Their casino is excellent, offering around five hundred different games that bettors would love to play.

When it comes to their sports coverage things aren’t quite as all encompassing. Some bookmakers would offer you odds on which fly will be the next to leave the window if they could, such is their desperation to appear to cover anything and everything. 32Red have been far more discerning, limiting themselves to just ten sports that they’ve covered in as much detail as possible. If you’re the sort of punter that wants to bet on the most random of things then it’s fair to say they’re not the bookmaker for you. If, on the other hand, you like the most popular sports, such as football, tennis, horse racing and rugby, then you’ll be pleased by what they have to offer. 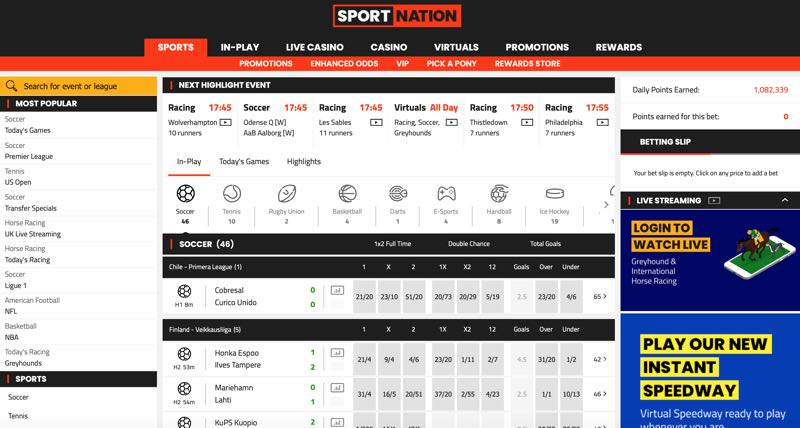 Owned by the Swiss-based start-up company Argyll Entertainment, SportNation sets itself apart from its competitors by having a tie up with the loudmouthed former footballer turned presenter Alan Brazil. As well as sharing his opinion on bets, odds and events via blogs and podcasts, the Talksport man also offers chances to meet him and his friends up as prizes every now and then. You can decided for yourself whether or not that’s actually a good thing!

The site launched back in 2016 under the name BetOnBrazil in the hope of gaining some custom ahead of that summer UEFA European Championships, offering nothing but football coverage at the time. Since then, they've rebranded to SportNation and they’ve gone through the slow and steady process of introducing other sports to their sportsbook, starting with the ones they consider to be the most popular. That means that you can also bet on the likes of horse racing, tennis and rugby union, as well as more random sports, such as American football and basketball.