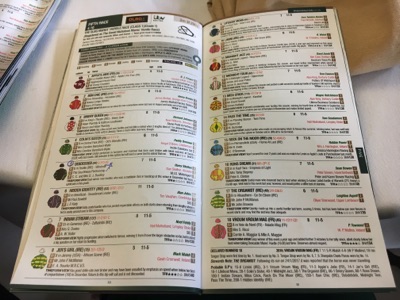 To the uninitiated, race cards can look like complicated things from which it seems almost impossible to figure out the information that you need to glean. The problem is that most people open a race card or look at the page on a race on a website and try to take it all in at once, when the key is just like with any other big topic – to break it down into more manageable chunks.

By breaking things down and knowing roughly what you’re looking for, you’ll be able to turn a seemingly incomprehensible race card into something you can actually learn something from. Here we’ll explain what everything means and how you can use race cards to give yourself some clues about what’s likely to take place during your day at the races. We’ll talk about race cards both in terms of what you can buy when you’re on the course, as well as if you look on a website of well-known horse racing companies because they offer the same information. 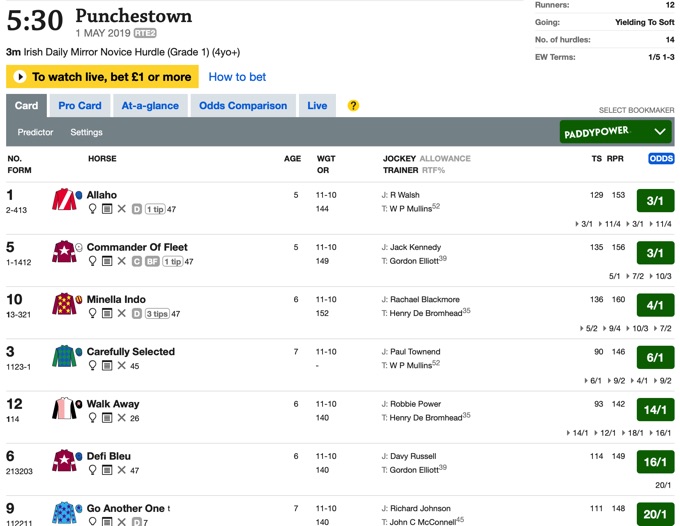 The first thing to note, just to avoid any possible confusion, is that calling the booklet that the information is found within a ‘race card’ suggests a single sheet of paper when, in actual fact, it is a booklet similar to the sort of programme that you would get if you went to the theatre.

On the outside, you’ll normally see the name of the race course and the date of the meeting, then inside each race will receive its own page at least, perhaps several pages if there are a number of runners.

As well as that information about the races and some about the racecourse itself, race cards also contain a fair whack of advertising that you’ll have to sift through. The same is obviously also true on websites, though it’s worth noting that they’ll do it in a slightly different way.

The important thing you’ll want to know about is the the race that you’re thinking of betting on, so flip through the race card until you get to the one you’re after. Equally, if you’re looking on a website then you’ll be able to click on the correct race and should be confronted with something that looks like this: 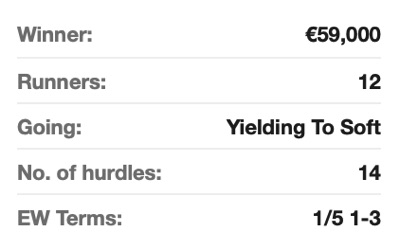 The first thing you’ll see in the bold on the lefthand side is the time of the race, followed by the racecourse it’s taking place at. After that is the race header, which consists of the distance it’s run over and the name of it, including any sponsor, as well its grade and the age of the participating horses. In the example I’ve chosen here that looks like this:

The distance is three miles, as denoted by the 3m. The sponsor is the Irish Daily Mirror, thence is the Novice Hurdle and it’s a Grade 1 offering that is open to horses aged four and over. If you’re looking in a race card at a course you’ll then find something telling you about how much money the winner can expect to receive, how long the race is, what the going is and whether or not it’s being shown on television at all.

Some will also say how many horses will be paid out for Each-Way bets and what the terms are, as well as the number of hurdles or fences that need to be negotiated by horses hoping to win the race. In the case of websites, this info is usually found to the right of the race name, etc.

If, on the other hand, you’re looking in the race card then it might well appear in written text like this:

To break that down, the first section is the amount the winner will earn, the second how many runners there are and the third the going at the time the race card went to print. After that, you’ll see the number of hurdles, which is fourteen, as well as the Each-Way terms. In this instance, horses that finish from first to third will be paid out on in Each-Way or Place bets, with the amount being 1/5 of the odds taken.

The final thing on the above list is the channel that the race is being shown on, which will change between numerous possibilities. In this instance it says RTV, which is Racing TV, but it could be ATR, which is At The Races, or ITV, for example. 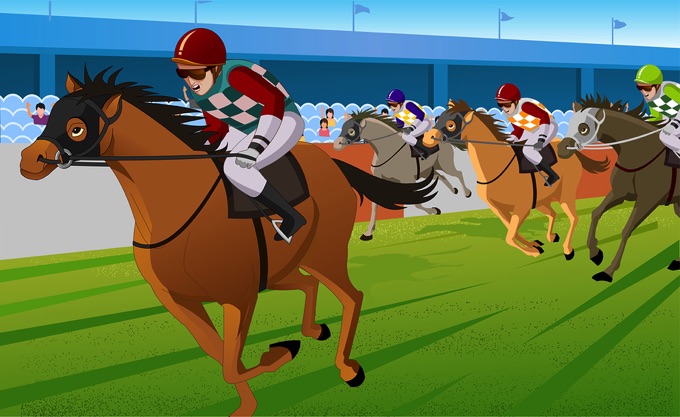 In terms of the most crucial thing for you when it comes to making your selection, you’ll want to think long and hard about the Going. Make sure you listen to local radio or speak to someone at the course if you’re there in person to ask what the actual going is, given that the one in the race card will be what the Going was when it went to print so might not be all that up to date. From the slowest to the quickest, it will usually be one of the following options:

The Going is dictated according to what the weather has been like in the days before the race, as well as where the race sits in the meeting schedule. If, for example, it comes at the end of three days of racing on the same course then the previous races might well have resulted in the turf being cut up and something that started life as a hard track could have become soft by the time the race you’re betting on rolls around.

The Details of the Race

This is considered by many to be the most complicated looking bit of the race card because it puts so much information in such a condensed space. It looks as follows online and can normally be found on the page that shows all races from the card on the same webpage:

In a race card it will all be written together and will look something like this:

Depending on the race you might also see the following included:

Again, let’s break it down. Some of the bits here are quite self-explanatory, with €100,000 being the money that will be shared between all of the places. After that comes information about the horses that are allowed to take part, in this case being fillies and mares and are aged four and over and have the requisite minimum weight according to their age and have a rating of between 0 and 140. ‘Penalty Value’ might sound scary, but it just means how much prize money each place will receive.

The ‘Penalties: After 10th February’ bit means that if a participating horse has won a Hurdle race since the date given then they’ll have to carry an additional four pounds in weight for each race of that type that they’ve won. The ‘InventedHorse Handicap Mark’ denotes the top-rated horse taking part, which in this instance is InventedHorse with a rating of 140.

Whilst the Going is crucial in terms of figuring out how a horse is likely to do, the race card will give you other important information that you’ll want to look out for in the form of information on the jockey, the trainer of the horse and the horse themselves. The image above provides an example of how this information is displayed online.

The first thing to note is the horse’s number, which in this case is 1. Underneath that you’ll see their form, with this list meaning that they’ve come 2nd, 4th, 1st and 3rd, with the most recent result at the end of the list.

Sometimes the list will include letters denoting whether they’ve fallen or something along those lines during a race. Whether the letters are capitalised or not is important, with the following being the most common:

Sometimes, as with Allaho, you might see a – or a /. The former means it was a new year and the latter that it was a new season.

You’ll normally see much more information in a race card at a course than you can see from the website, including the colour and the sex of the horse. Again, these are denoted by letters with the following being for the sex:

And the following for colours:

In between the number and the horse’s name you’ll usually see their colours, which includes the colour of hat they’ll be wearing. In the case of Allaho they have a red top with a white sash and a blue cap.

Website race cards differ from those at the course for a number of reasons, with one being that course-based cards often give you information about the Sire and Dam as well as the Damsire of each horse. That’s the father, mother and grandmother, so you can see the line that they’ve come from.

Race cards at courses will also often give you the colours in writing, largely because some of them are black and white. In this instance, it would say RED with WHITE stripe, BLUE cap.

In the above information you’ll note that there is a J and T, which denote the Jockey and Trainer. In the case of Allaho the jockey is Ruby Walsh and the trainer is Willie Mullins, which helps to explain why it’s considered to be one of the favourites! The on-course race card might well also include any weight that the jockey can re-claim.

Referring back to the above imagine, you’ll notice that there’s both the horse’s Age and a section labelled ‘WGT OR’. The WGT stands for weight and the OR means their rating. In the case of Allaho, the weight is 11 stone 10 pounds and their rating is 144.

The rating is important because the horse with the best rating will carry more weight than those below, usually with a horse taking a pound off for every number below the favourite they are. Let’s say Allaho is the favourite with his 144 rating, if a horse was rated as 139 then they’d carry five pounds less if it’s a handicap race. 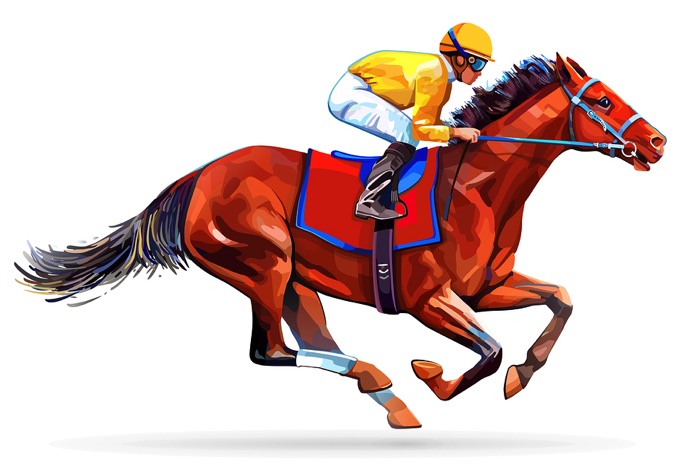 The final thing worthy of a mention on this page is the TimeForm rating that some race cards will offer. This is usually a sentence description that tells you what you need to know about the horse, such as whether they’ve done well on this course in the past and a star rating for well or otherwise they’re likely to do. For example, it could say something like this:

Finished third last time out but has won on this course before. Is in good form over fences ****

The star system indicates their chances of winning the race and the breakdown is similar to this:

On some race cards you might also see the following letters, which tell you specifically about the horse and the race in question: