People have taken money in return for bets for as long as civilisation has existed with the earliest six-sided dice dating back to Mesopotamia in 300 BC. In the United Kingdom, bookmakers existed on racecourses alone initially, before government acts in the 1960s allowed them to move onto high streets around the country. Generally speaking, though, the format that betting would take remained much the same for most of that time, especially when it came to placing bets on sporting events. Whether a pools-based system like the Tote or simple fixed-odds betting as we’re used to seeing from the major bookies nowadays, you know what you’re getting when it comes to how bookmakers work. Wouldn’t it be nice if someone came up with a different way of doing things?

If you’ve read some of the other pages on this site then you might have heard me mention betting on the Exchange. Some of you will know exactly what I’m talking about, whilst others won’t have a clue. This page is more for people that fit into the latter category than the former, though even if you know exactly what the exchange is all about then it’s still useful to give yourself a refresher from time to time. You never know, there might be something on this page that you’ve never heard before or simply didn’t realise. If you know nothing about the Exchange then reading through the information here should give you a much better idea of what to expect if you ever decide to venture onto one.

What Is an Exchange?

When you first find out about an Exchange it can seem like a daunting prospect. People talking about ‘buying’ and ‘selling’ might throw you for six. If I’m being totally honest, I’m at least a little bit suspicious that some Exchange users like to make things as complicated as possible I order to make it seem like they’re really clever. That’s not to say that it’s really simple, but once you’ve got to grips with the basics you’ll start to realise that it’s easy enough to get your head around.

The simplistic answer to the question ‘What is an Exchange?’ is that it’s a place where bettors can go in order to ‘be the bookmaker’. That is to say, instead of fixed-odds betting, where a bookmaker will offer you odds and you either accept them or refuse them, this is people dealing directly with each other and the website hosting the Exchange merely acts as an intermediary. You can request odds and see if someone else is willing to offer you them, or you can offer odds and find out if anyone out there would like to take them.

Why Use an Exchange Rather Than a Traditional Bookmaker?

Bookmakers balance the books by offering you odds that give them a slight edge. Simplistically speaking, let’s say an event has only two possible outcomes. In that instance, the odds are 2/1, but a bookmaker will likely offer you odds of 3/2 on either outcome, which gives them a nice little edge. It’s how they consistently stay in the black, pretty much regardless of what happens at the end of the event. There’s nothing wrong with that, of course. At the end of the day, bookies are businesses and need to figure out how to end up on top to keep things ticking along. It’s just that the Exchange works slightly differently.

By turning to an Exchange you’ll normally get slightly better odds than from a traditional bookmaker, especially as you’re actually able to dictate your own odds if you want to. The only problem then is that you’ll need someone else to take those odds, which isn’t set in stone. I also don’t want to suggest that the entire enterprise is some sort of exercise in philanthropy from the bookies that offer an Exchange. They still make a decent return, it’s just that the do it by taking a percentage of your net wins rather than by giving themselves an edge with the odds.

How Do Exchanges Work?

Exchanges aren’t charities, nor are they set up merely to introduce two different people who want to place bets to each other. Instead they’re like market places, with people buying and selling things in Exchange for a fee paid to the person that runs the place. The ‘fee’ in the case of the Exchange is found in the commission that they take from your net wins. The more that you win, the more likely it is that you’ll be able to negotiate with the Exchange directly in order to lower your commission percentage. Typically speaking, you’ll be looking at about 5% when you first starting using the Exchange.

As I mentioned at the start, there’s an extent to which the Exchange seems a bit complicated when you first start using it and that is largely down to the different terminology used when betting via one. Here are some of the main terms used:

Normally in football match betting, you have three choices: Home Win, Away Win and Draw. On the Exchange, you can give yourself additional options by Laying or Backing one of those results. Here’s how it looks on Betfair’s Exchange:

’Backing’ in this instance is the blue boxes and it’s basically the same thing that you’d do with a normal bookmaker. If you were to Back Roma in this instance, then you’d be saying that you expected them to win and you would be paid out accordingly. So far, then, so normal.

Things get interesting when you start talking about Laying a bet. Laying essentially means that you are acting as the bookmaker and believing that something won’t happen. If you were to Lay Roma at home then that’s the equivalent of saying you think that the match will either end in a draw or Spal will win. Laying odds are displayed in the red boxes here.

If you Lay a Bet then you will have a Liability, which is the amount of money you’ll need to pay out if your bet is a loser. You’ll need to have that amount of money in your account before you’ll be able to Lay the bet, which is worth remembering if you try to place a bet and can’t. Again, here’s what it looks like on Betfair:

You can see there’s a button at the top that will let you switch between how much you’ll receive as a Payout if you win and how much your Liability is if you lose. In this instance, I’ve bet against Roma winning at decimal odds of 1.27 with a stake of £4, giving me a liability of £1.08.

A Matched Bet is simply a bet that you’ve offered and someone has taken you up on, or that you’ve called someone else on. As I mentioned before, you don’t need to accept the odds that you’re offered on the Exchange. If you’d like to you can invent your own odds and put them out onto the Exchange, seeing if anyone fancies them. Here’s how I’ve edited my odds for the same bet as above:

You’ll note that I’ve changed my odds to 5, which increases my Liability to £16. I can click the ‘Place Bet’ button, but it won’t actually be a Matched Bet until someone else on the Exchange decides that they want to Back Roma at odds of 5. When they do, we’ll both be committed to the wager and it will become a Matched Bet.

How Do the Odds Compare to Traditional Bookmakers?

One of the most obvious questions when it comes to thinking about betting on the Exchange is to ask how the odds there tend to compare to more traditional bookmakers. Here are odds from the Exchange on two Premier League matches coming up over the weekend when I’m writing this piece:

As a comparison, here are the odds from Betfair’s sportsbook for the same events:

What I would say is that if you’re betting reasonably small stakes, then the Exchange doesn’t offer significantly better value. It’s only really if you start looking at massive stakes when the difference between 7.6 and 7.5 really starts to come into play.

Of course, the key thing about the Exchange is the fact that you can add your own odds if you want to, meaning that the difference between the Exchange and the sportsbook of a traditional bookmaker can be made moot if someone is willing to Match your bet.

Which Companies have Exchanges? 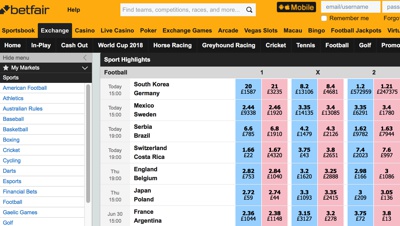 Without doubt, the biggest Exchange comes courtesy of Betfair, the company the brought it to the market as a way of placing bets. In fact, Betfair only launched their traditional sportsbook in 2012, making a reputation for themselves thanks to their excellent Exchange. They grew to the point that they were able to merge with Paddy Power in 2016, with the new company Paddy Power Betfair now in operation. If you want to place bets with an Exchange, then Betfair is unquestionably the place to start.

They’re not the only bookie out there with an Exchange to offer, however. Betdaq were the major rivals to Betfair before being bought out by Ladbrokes in 2013, with the company now operating the Exchange for the classical English bookmaker. You can head to Betdaq directly if you’d like to, but in terms of well-known bookies that have an Exchange, you’ll be able to use your Ladbrokes account. 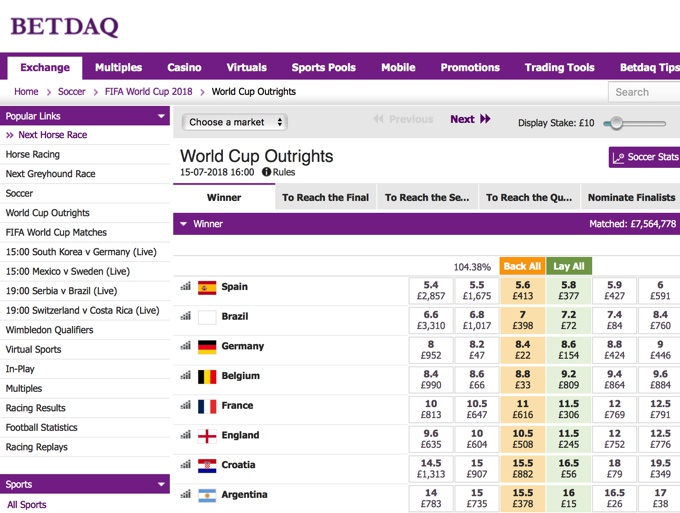 There are two other, significantly smaller, companies that you can join up with if you want to use an Exchange but aren’t keen on turning to the big boys. They are Smarkets and Matchbook. The former refers to itself as ‘the future of sports, political and event trading’, so it’s a reasonably solid guess that they’re going to grow more and more in the coming months and years. Personally, I find Matchbook’s website to be a little bit more user friendly than Smarkets, but that’s probably because it’s quite similar to Betfair’s site and that’s what I’m used to using.