We take so many things for granted nowadays, including the impressive developments in the world of betting. Next time you fire up your iPhone or Android and load up a betting app, just a take a moment to think about how amazing that really is. You’re able to bet on a football match taking place in Azerbaijan, whilst you’re waiting in the queue at the supermarket or, if we’re being honest, say on the loo. That’s a remarkable achievement, all things considered.

Now we’re seeing the move from technology affecting the way that we place bets to influencing the way that we put money into our accounts. That is no more evident than in the fact that certain bookmakers are allowing punters that have iPhones to use Apple Pay to make deposits, but what is Apple Pay and how does it work?

What Is Apple Pay? 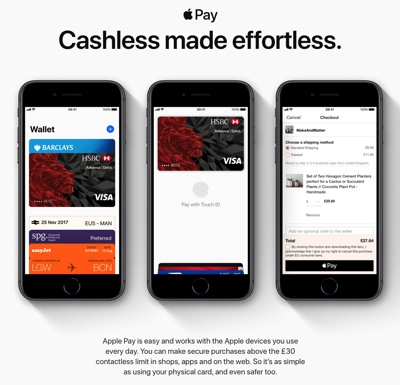 Apple Pay is, as the name suggests, a proprietary technology belonging to the technology giant Apple. It’s a way for Apple’s customers to make payments online using their mobile phone and, in recent times, they’ve started to allow Apple Watches to be used to make contactless payments. Apple refer to is an ‘easy, secure and private way to make payments’ and you won’t hear me disagreeing.

It is a digital wallet, which are becoming more and more popular as the technology develops to allow them to work. Originally launched in 2014, it is only available on Apple devices, so if you’re an Android user then you’ll just have to look on in jealousy whilst talking about how amazing it is that you can install random apps from the Internet on your phone…

How Does It Work?

The real beauty of Apple Pay comes in how easy it is to set up. If you’ve already added a card to your iTunes account, which most people have as you need to do so in order to pay for apps, songs, videos and so on, then you can tell Apple Pay that you want to use that same card for its services and you’ll just need to enter the three-digit security code from the back of your card when prompted.

The reason Apple are so happy to talk about the service as being so secure is that any digital transactions are made using a unique transaction number that is linked to a specific number on your device. That means that none of your personal details are stored on your phone or tablet and they’re never sent to the merchant or a third party. 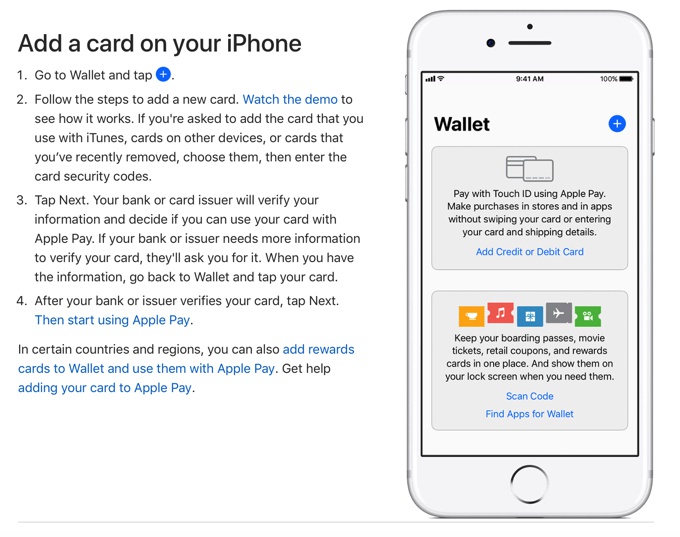 If you have only just got your Apple device or never linked a card to it, then you don’t need to worry. One of Apple’s best qualities as a company is that they know how to make everything that they do as user-friendly as possible. That remains the case with Apple Pay, so as soon as you attempt to set up the service you’ll be guided through how to add your card of choice.

More and more banks and card providers are coming on board for Apple Pay with each passing day, with the major providers like Barclays, American Express, Bank of Scotland, Clyde Bank, NatWest, Co-op, First, Halifax, HSBC, Lloyds, MBNA, Marks & Spencer, Metro Bank, Nationwide, RBS, Santander and TSB already available, to name but a few. All you need to do is have your card ready and follow the instructions! 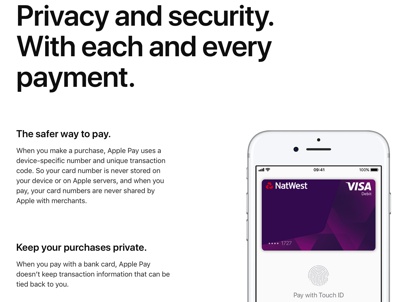 Once it’s up and running you don’t even need to worry about things like whether or not your personal details will be stored and what a unique transaction number is. The device you use will do all of that for you. Still, it’s handy to know that it’s a secure way to pay for things. That security is doubled-down on by the manner in which you give your device permission to make a payment.

Unlike with a debit card and contactless payment, you need to actually confirm that it’s you using your device when you make a payment. That means that random strangers won’t be able to pick up your phone and pay for stuff willy-nilly. Instead, whether you are paying for things on your device directly or in a shop with a contactless machine, you’ll have to present your fingerprint to Apple’s TouchID system. Since the release of the iPhone X, the company has also added FaceID as a confirmation method.

Apple Pay keeps no transaction information that can be traced back to you, either. That means that you can use it to buy someone a present without them knowing it, for example, and only the most recent purchase is visible, with even that only being on there for convenience. In other words, Apple Pay is one of the most secure transaction methods that you can use. Even if a bookmaker was hacked or had some sort of security issue, the perpetrators wouldn’t be able to get any of your information as none of it will be stored on their servers if you’ve been using Apple Pay for your deposits. Your withdrawals are another matter, but I’ll cover that in a moment.

Are There Fees to Pay?

Apple Pay isn’t available with many bookmakers at the time of writing, so it’s entirely possible that this will change in the future, but at present, none of those that allow deposits via Apple Pay will charge you a fee for doing so. Of course part of that depends on the card that you link to your Apple Pay account.

How to Use Apple Pay to Deposit Funds with a Bookmaker

In essence, Apple Pay works just like any other eWallet that you might have encountered in the past, with Skrill being the most obvious example. It goes without saying, of course that you’ll need to have an Apple device, such as an iPhone or an iPad, and you’ll need to have a payment method associated with your Apple Pay account. As long as that’s the case, it couldn’t be easier to add funds from Apple Pay to your bookmaker account.

In order to write this section, I added £5 to one of my bookmaker accounts using the Apple Pay method and it literally took me less than thirty seconds. Here are the steps I followed to deposit that £5 into my account:

That’s it. It really is that simple. Those steps were used for one specific bookmaker, but obviously others may use different slightly methods according to how they’re set up, so just see what they ask you to do or contact the customer services department of the bookie that you use to ask them if it’s not clear. I’m willing to bet (no pun intended), that it will be clear because that’s the major selling point of Apple in general.

As soon as the payment has gone through, you’ll get a notification onscreen telling you as much and that’ll be it. This is why I talk so highly of Apple Pay as a deposit method, but it’s just so quick and convenient. It won’t be for everyone, least of all because not everyone has an Apple device, but that that do will be able to use it quickly and easily whenever they need to anywhere from £5 to £500 to their bookmaker’s account.

What Else Do You Need to Know?

I made a brief reference to withdrawals a moment ago. That’s because, at the time of writing at least, you can’t use Apple Pay to make withdrawals from your betting accounts. That’s obviously a bit of a frustration, but it doesn’t actually make all that much difference to the service. If you want to take money out of your account, you simply need to direct the bookie you use to send money to your debit card and they’ll do it without any fussing or messing around.

Should You Use Apple Pay to Deposit Funds?

As with pretty much any deposit method, it’s not easy to give a definitive answer to that question. The reality is that it’s one of the quickest, smoothest and, being honest, most fun ways to add funds into your bookmaker account. The biggest issue with it is that so few bookies actually allow their customers to do it. That’s likely to change in the coming weeks and months, of course, but for now, it’s definitely a source of frustration for most. Apple have long mastered the ‘amazing customer experience’ side of business, so from their end, you’re likely to find this about as convenient and painless a deposit method as it’s possible to be. Yet the lack of gambling companies allowing you to use it will feel like a let down.

Ultimately, whether you think Apple Pay is for you will come down to whether or not you like a smooth, quick and secure deposit method. It will also need you to not mind about the fact that you can’t withdraw money from your account via Apple Pay and can only deposit, but that’s something that you’ll have to figure out for yourself. Personally, I love it because of one keyword: integration. Aside from anything else, it’s just easier for me to use Apple Pay to make deposits than to mess around with my debit card. If I want to make a debit card transaction, for example, I’ve got to type in my security code on the back of my card and I don’t always have my wallet with me. I’ve always got my face with me for FaceID, however, so it’s significantly less tricky for me to use my natural good looks to pay for things whenever possible.

A Brief History of Apple Pay

Apple itself was started back in 1978, with Steve Jobs being the major mastermind behind it. It’s more complicated than that, as anyone who has watched the Aaron Sorkin scripted film ‘Jobs’ will know, but this isn’t the place for a potted history of the ins and outs of Apple. The company made a name for itself with the development of the Macintosh personal computer in the 1980s, with Apple having ups and downs during the next couple of decades. It was the 2007 launch of the iPhone that sent the company truly stratospheric, completely changing the way that we use our mobile phones. They have since taken that to new levels, both with the development of their personal computers, as well as the introduction of the likes of tablets and smart watches.

As for Apple Pay itself, it was an idea that the company were working on for a number of years before it eventually came to fruition. Over the years they acquired numerous start-ups and hired executives who they believed could take them to the promised land of a safe and secure payment method, reaching agreements with American Express, MasterCard and Visa in 2013. The software was first featured on the company’s operating software, iOS, the following year. In 2015, the service began to be rolled out internationally with the UK one of the first countries outside if the United States to get Apple Pay. More and more companies began to get involved from that point on and they’ve been coming on board with regularity ever since.

The introduction of Apple Pay and the use of the EMV Payment Tokenisation Specification didn’t have bookmakers queuing up to get involved, but once the likes of 888 Sport began to offer it. more companies realised its potential. I would imagine that within the next couple of years virtually every major bookmaker will be offering Apple Pay as a payment solution. It may come down to consumers pushing for it, which they almost certainly will once they realise how safe, secure and speedy it is as a payment method. Alternatives include the likes of Skrill, PaySafeCards and PayPal, but none of them offer the integration and speed of use that Apple have worked so hard to develop ever since the concept came about.