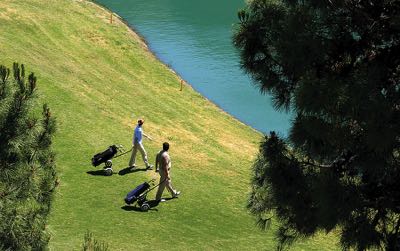 You can read about dead rules in the likes of horse racing elsewhere, but things are a little different when it comes to golf. Whilst the actual dead heat rules are pretty much the same, the likelihood of a dead heat is increased in golf on account of how the tournaments tend to be structured and how many players there are. This can lead to an increased sense of confusion when you’re trying to figure out what is going to happen to your wager, looking at the finishing positions and seeing a wealth of players tied for the same one.

Obviously there is an extent to which each bookmaker has got their own rules and small print for the various bets that you can place, but it’s fair to say that most companies act in the same manner when it comes to dead heats. There is something of a hard and fast rule, which is as applicable in golf as it is in any other sport, which sees your stake divided by the number of people that finished in the same position. We will explain that in more detail in this piece, but the rule of thumb is such that you can expect golf to treat a dead heat like any other sport.

What Are the Dead Heat Rules?

When you place a bet, it will normally be done on the understanding that it will be either a winner or a loser. Sometimes you’ll know that there might be something a bit strange that can happen, such as when you’ve opted for a Draw No Bet option on a football match and you get your stake returned to you in the event that the match ends without a winner, but generally speaking, you’d expect there to be a winner outright and for your bet to be settled accordingly. That doesn’t always happen, however, such as when there is a dead heat.

The usual example for a dead heat in sports is when two horses cross the line at exactly the same time, meaning that they can’t be separated even by a photo finish. It is interesting that that is the usual example, given that it is much more likely to happen in golf. It is perhaps the fact that it can be too common and complicated in golf that means that people avoid using it as an example, but it’s certainly one that we’re going to be looking at in more detail here, even though it works in the standard way that you’d expect.

In short, when a bet ends in a dead heat, which means that two or more competitors can’t be separated, you’ll find that your stake is divided by the number of people that tied for the position in question. In golf, this doesn’t tend to happen for the winner of the competition, given that extra holes are played in order to determine the victor. When you place an Each-Way bet, however, or your wager is on a player achieving a Top 3, Top 10, Top 20 or so on finish, dead heats can very much come into play and alter your payout.

How It Differs With Golf 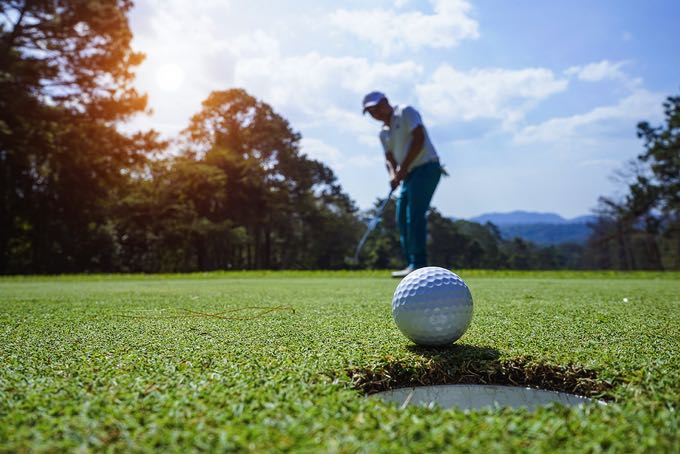 In golf, there is always a winner

When it comes to dead heats in golf, things are ever so slightly different. As mentioned, it is unlikely that you’ll get a dead heat for the winner of a golf tournament, given that this is an outright thing and is usually decided by a play-off on extra holes. If you had bet on a golfer finishing in the top 10, say, then you might well find yourself in a position where the dead heat rules would apply. The problem is, they become slightly more complicated for golf than they would in other sports, largely because of how many players might finish in the same position.

Obviously how the dead heat rules work depends entirely on the bet that you’ve placed. Let us imagine a scenario in which you’ve placed a £20 bet at 50/1 on a golfer to be leading at the end of the first day of the US Masters. In the end, the first day reaches its conclusion with two players tied for the lead. In this instance, your stake is divided by the number of players tying for first, which reduces it to £10. You will be paid £510, which is £10 x 50 plus your stake, rather than £1,020 you would have been expecting.

That is obviously a relatively simplistic example, but it gives you a sense of what will happen to your wager in that sort of instance. Where things become much more complicated is if there are a wealth of players tied for a position that alters your bet. Imagine, for example, that you’d placed a bet on Bryson DeChambeau to finish in the Top 5 at the Charles Schwab Challenge back in 2020. Here’s how the final leader board for the tournament looked when all was said and done:

As you can see, four players tied for third place, but that doesn’t mean that your bet is simply divided by four. This is because those players essentially take up positions 3, 4, 5 and 6 on the leader board, meaning that there are four players tied for three positions. As a result of this, your stake will have been divided by 75% of what it was originally. In other words, a £40 stake would be reduced to £30, with the other £10 simply lost to the bookmaker because that’s how dead heat rules work.

Your stake would have taken an even bigger hit if you’d have been betting on Justin Thomas to finish in the top 10. There was just one place left in the top 10 and four players tied for it, meaning that your stake will have been divided by four. If we again look at the example of a £40 wager, that means that it drops to £10 for your bet, with the stake divided by the four players vying over one place. Had you bet at odds of 2/1, you’d be paid £30 back including the one quarter of your stake, losing the other £30 and therefore simply drawing even.

What About Each-Way Bets? 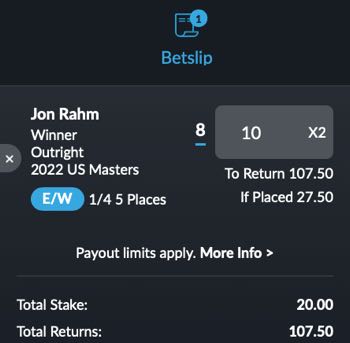 Unsurprisingly, there is a further level of complication when you’ve placed an Each-Way bet. Imagine, for example, that you’d opted to place an Each-Way bet on Bryson DeChambeau winning the tournament .Your bookmaker of choice is paying out at 1/4 of the odds to three places, meaning that your bet is a winner on the Each-Way part of it, but it is quite complex to figure out how much you’re actually going to be paid. We already know that your stake is going to be reduced to 75%, but what of the odds?

The bookie that you use has stated that the odds will be reduced to 1/4 and you took odds of 12/1, meaning that they are actually reduced to 3/1. Now you’re in a position where, rather than being paid on the winnings of a £40 bet on odds of 12/1, you’re going to be paid a £30 bet at odds of 3/1. This means that you’ll end up getting back £120, including your stake, rather than the £520 that you would have got had DeChambeau won the tournament outright without any dead heat rules coming in to play.

Things can become even more complicated if you start to be in a position where there’s only one place available, as with our bet on Justin Thomas. Let us imagine a situation in which you’d bet Each-Way on Thomas to win the tournament and he’d finished tied-3rd with two other golfers. In that instance, most bookmakers use a formula of number of places remaining divided by number of participants involved in the dead heat, as explained earlier. That means that your stake will be reduced by 1/3 and your odds by 1/4.

Now a 12/1 bet of £30 becomes a £10 bet at odds of 3/1, so you’d be paid £40 including what’s left of your stake, rather than £390. Of course, the big thing to remember is that you don’t need to worry about any of this. Bookmakers will automatically to all of the calculations for you and pay you what you’re owed from your golf bet, but it is handy to know how they reach their calculations so that you can be less confused when your payout is smaller than you were expecting to be when you check your account.

Why Does Golf Have So Many Ties? 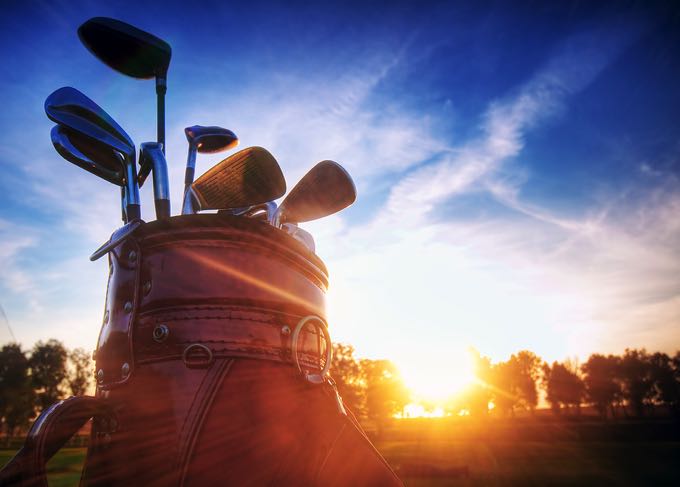 An obvious question that you might ask is why, exactly, golf has so many ties. The reality of horse racing is that dead heats rarely occur, but because it is the sport that the dead heat rule was invented for, it is the one that is most commonly used in explanations. In golf, ties are so common because players will often finish with similar scores to each other. Don’t forget that we’re talking about some of the best players in the world, the top grouping of which are playing at a similar level to each other taking on the same course.

The result of this is that it is extremely common for the players to finish on the same sort of scores as each other, even though they’ll have taken very different journeys to get there. In the vast majority of tournaments that you’ll be able to bet on, the players will have been asked to take part in four rounds of golf. It is not unreasonable to imagine that one could finish their rounds at -3, -5, -2 and -7, putting them 17 under par, whilst another finished their rounds at -5, -5, -4 and -3, meaning that they also finish 17 under par.

The two golfers had vastly different experiences on the course over the four days, but both of them finish on the same score as each other. If they’re vying for victory in the tournament then they will play extra holes as a play-off to decide upon an outright winner, but the same is not true if they’re tied for a lower position. Whilst bettors and bookies might love there to be a play-off to decide upon who finishes fifth, the organisers of the competition couldn’t care less and it doesn’t change anything like prize money, so that’s the way it works.

Indeed, when it comes to prize money, it can actually benefit a player to be tied for a place. That’s because, on the PGA Tour at least, what happens is that the prize money available for all of the places concerned is added together and divided equally amongst the golfers. As a result, three players tied for 3rd place don’t split the 3rd place money between them, but instead the money on offer for 3rd, 4th and 5th is added together and then split between the three players evenly. A player who had been heading for 5th but squeezed into tied-3rd therefore earns more money.

What About the Countback?

If the scores were identical on the back 9 then you’d look at the back 6, into the back 3 and so on. When it comes to the hardest holes, this is as determined by the Stroke Index of the golf course. Given that this is an official system used to determine which players finished where, why isn’t it used in tournaments?

The answer to that question is that it isn’t really used by professionals. Countback tends to be done on a golf day or golf society or if players have taken part in a friendly competition. Professionals will instead use the play-off system to determine the winner of the competition and anyone else tied for a place will just finish tied. If competition organisers aren’t going to use it to separate the players, bookmakers certainly aren’t.