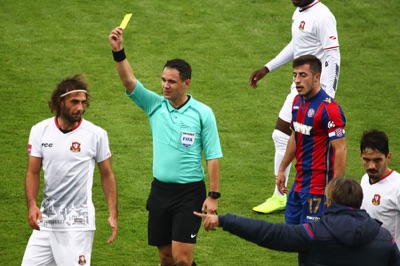 Football is a team game, but there’s a reason that the best players in the world move from team to team for tens, if not hundred of millions of pounds. The best goalkeepers and defenders can change the face of a team in terms of conceding goals just as the best attackers can switch matches from draws to wins for the teams that they play for.

It’s little wonder, then, that bookmakers offer a wealth of markets to punters wanting to bet on specific players doing things like being named Man Of The Match, scoring the most goals or even getting booked. 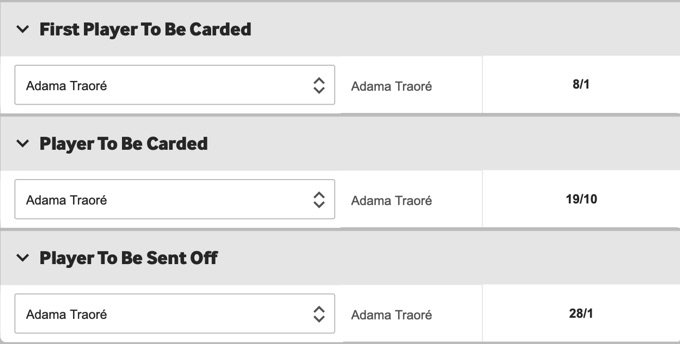 Every team has a player that feels as though they’re a disaster waiting to happen. Whichever team you support there’s a real chance that the player that wears their shirt has already popped into your head.

There are numerous reasons why certain players always seem to pick up bookings, but if you can work out what they are then you can find yourself in a position to make some bets that you can feel reasonably confident about. Most bookmakers will offer three main markets: First Player To Be Carded, Player To Be Carded and Player To Be Sent Off.

First Player to Be Carded

The first of those will give you longer odds because you’re trying to predict which player will be shown a card before any other one on the pitch, meaning that there are twenty-two options before you even get into the world of substitutions and so on.

Player to Be Carded

The second option is a binary yes / no bet on whether or not a given player will be shown a card. For the example above I’ve picked the same player in all three examples to show you the difference in odds. For Adama Traoré to be booked at any point it’s 19/10, whereas for him to be booked first it’s 8/1. Clearly you can see where the value is, but that doesn’t meant that you should definitely bet on that market.

Player to Be Sent Off

The other bet bookies offer as far as players and cards is concerned is for a player to be sent off. Whether or not you think that’s a bet worth placing will largely depend on why you think they’re going to get booked in the first place. If they’re the sort of player that acts as the ‘enforcer’ for their team then they might well get a yellow on a fairly regular basis because they take a tactical one for the sake of the team.

Equally, if you think that they’re going to get booked because they’re slow and you know that they’re up against a fast player then a booking isn’t going to stop them from being slow, so a sending off is a possibility. The key thing to find out about at that point is their temperament. Are they an old hand that has been in the game for a long time and will know that they’ll need to be careful once they’ve been show a yellow card? Or, are they hot-headed and being booked won’t stop them from going in hard into the next fifty-fifty challenge that they’re faced with?

The other thing that should be top of your list when it comes to research before placing bets on cards is the match referee. The Premier League has an excellent website where you can view the various stats for the referees that they use, separating them out by season: 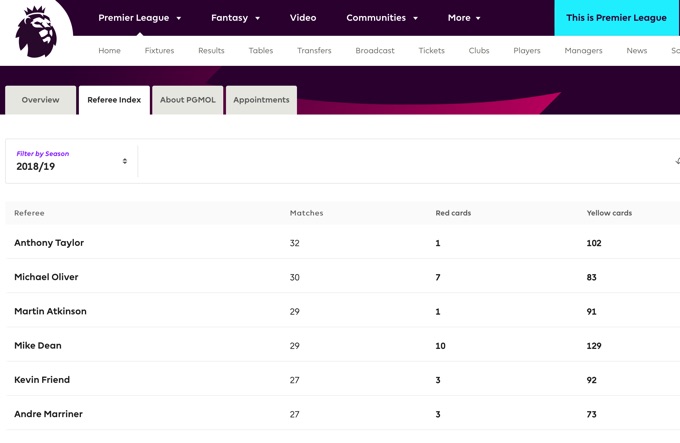 They also announce who will be the march referee ahead of time, so if you’re thinking of betting on a match that features a card-happy referee and a hot-headed player then the Bookings market will be well worth having a look at.

To Score in Both Halves 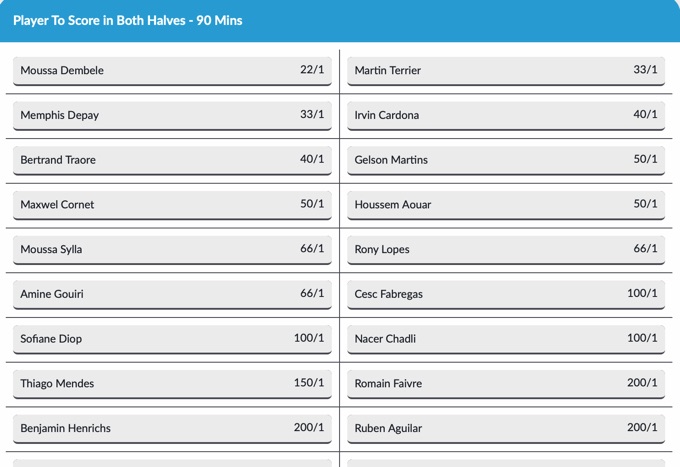 Looking at something like bookings is to contemplate the more negative side of the game, so let’s have a look at something more positive to balance that out. It’s not uncommon for bookies to offer you a market such as Player To Score In Both Halves, which is, rather obviously, a bet on the player of your choice scoring a goal in both the first-half and then again in the second.

The odds here will be longer than bets on the likes of Anytime or First Goalscorer markets because you’re asking for a player to not only score twice but to do so in specific periods of the match. As an example, in the game between Monaco and Olympique Lyonnais in France’s Ligue 1, Moussa Dembélé was 15/8 to score Anytime but 22/1 to score in both halves.

Again, it’s obviously to see where the value is, but no other player had shorter odds than him to score Anytime, so it’s clear that the bookies think he’s likely to score at some point. Given that fact, the longer odds for a goal in each half suggests that bookmakers don’t think it’s all that likely to happen. That doesn’t mean you shouldn’t place the bet, just that it’s worth bearing in mind before you jump on the wager.

First to Score for Their Team 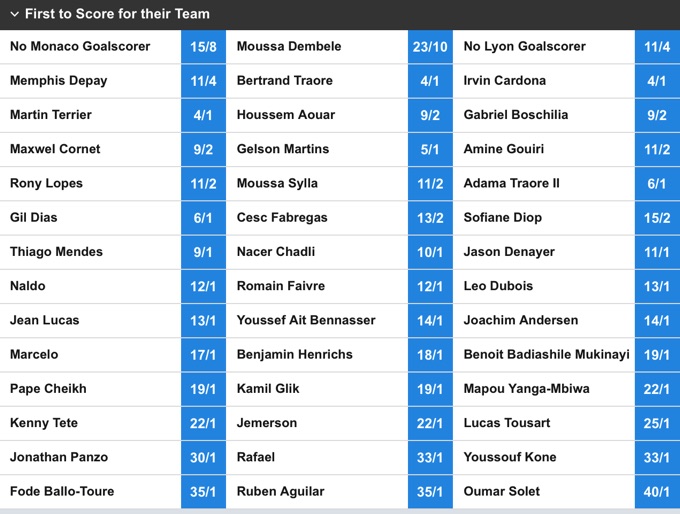 I covered this bet in my piece on First / Last / Anytime Goalscorer markets, so I won’t go over the same ground too much here. That being said, as this page is all about the various Player Specials that you can get from different bookmakers it’s worth mentioning it quickly.

This bet removes the risk of a player from the other team scoring before your selection if you’re betting on the First Goalscorer market as it asks you to predict which player, if any, will score the first goal for their team. As you can see from the list of odds, Moussa Dembélé is 23/10 to do so, which is slightly better odds than him being an Anytime Goalscorer.

To Score More Than Once

It’s not uncommon for bookmakers to offer you additional markets in the realm of First Goalscorer, with the chief ones being odds on whether or not they will score twice or get a hat-trick. It looks a little like the example above.

As you might imagine, the odds get longer the more goals you think a player might score in a game. The reason for this is that they are a lot rarer than you might imagine, with just eight hat-tricks scored in Ligue 1 during the 2018-2019 season. Three of them were scored by the same player in Paris Saint-Germain’s Kylian Mbappe, whilst none of them were scored by Moussa Dembélé.

Once again, none of that means that you should bet on a player to score a hat-trick, it just means that you might want to think about why you’re thinking of placing the bet and what indications there are that it will come off for you. It’s also worth doing your research to ensure that you’re not just sticking your finger up in the air and hoping for the best. 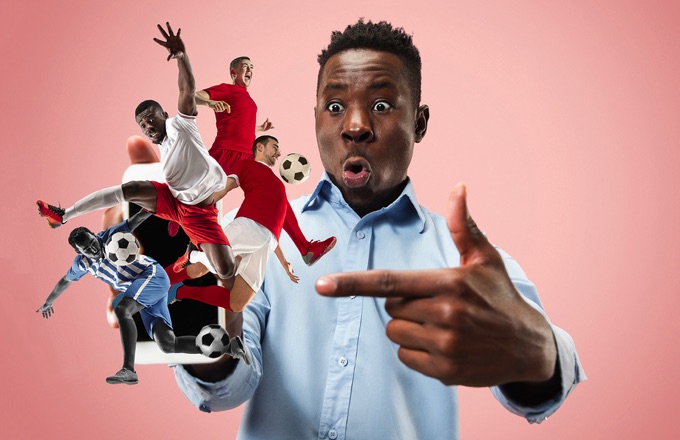 There are other markets offered by certain bookmakers that you might also want to look into if you’ve got a good feeling about how a player is likely to do. During the 2018-2019 season, for example, some bookies allowed you to place a bet on the Man Of The Match, as decided by WhoScored.com. That used specific metrics that you could look at and try to figure out if they were likely to fall the way of the player that you bet on.

At the time of writing no bookie that I use is offering Man Of the Match betting, but if they start doing so then remember to make sure that you look at the small print regarding how the award is decided and whether or not there’s anyway to predict which player is most likely to win it before a ball is even kicked. That is to say, if you know the metrics that they look for then see if you can tell from past results which players are most likely to hit them.

Since the move by the majority of punters to placing bets online, bookmakers have been more and more keen to use statistics when it comes to the markets that they offer. It’s not unusual, for example, for a bettor to tweet or message a bookie and ask them for odds on player X to have Y number of shots on target and his team to win.

The Request-A-Bet type features offered by the various bookmakers out there are great for creating your own market that revolves around players. Here’s a look at some examples of such markets offered in the Monaco versus Lyon game:

As you can see, combining players scoring with match results gives a much better set of odds than either market on their own. Cesc Fabregas to Score Anytime was 5/1, whilst Monaco winning was 23/10, with the combination of the two coming out at 12/1. It’s a simple enough way of widening the available odds by essentially creating your own mini accumulators.

It’s important to remember that there should be a logic and thought process behind your bets. Don’t just opt for something because the odds are long, but rather do some research and work out what the stats suggest is most likely to happen. If a player has had thirty-five shots on goal over their past two games, for example, that doesn’t automatically mean that they’re due a goal. If, however, thirty-one of those shots have been on target then it’s suggestive of someone who has been unlucky in front of goal for some reason.

The brilliant thing from a better point of view is that there is now plenty of information out there when it comes to a player’s statistics. There are countless websites that will look at everything from their shot placement through to their passing radar to give you a more in-depth look at whether they’re running hot and their form will turn for the worse soon or else running cold and due some better fortune in the near distant future. Make sure you use it whenever you can.