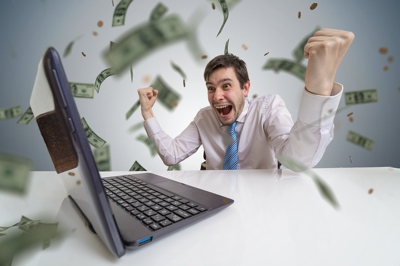 One of the biggest reasons that we love betting is the chance to hit the jackpot. Whether you’re talking about national lotteries or progressive slot machines, the opportunity to strike it rich is often too much of a temptation for most people to resist. I’ve written an article elsewhere on the site about some of the biggest underdogs in sport whose victories have earned those brave enough to bet on them a pretty penny, so that’s not what I’m going to talk about here. Instead, I’m going to have a look at some of the biggest accumulator wins in bookmaking history.

Most of you will, of course, know exactly what an accumulator is. Just in case you don’t, however, I’ll give you a quick summary now. In simple terms, an accumulator is a series of bets that all need to come in in order for the overall bet to be a winner. You could place five separate bets on five different horses to win, for example, and if only three of them won then you’d collect the winnings from those three and forget about the other two. In an accumulator, though, those losses would mean the entire bet was a loser. The reason people love accas is that increased number of things that need to happen for it to be a winner means that you get a bigger payout when it is. The following examples will show you exactly what I’m talking about.

A 30p Bet Earns One Football Fan Half a Million 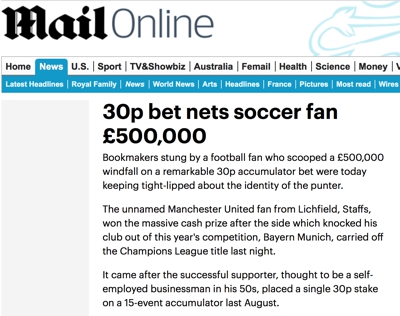 This is arguably the purest example of an accumulator doing what every punter that ever places one hopes it will do – giving massive returns from a tiny investment. The unknown Manchester United fan placed a fifteen-fold accumulator at the start of the 2000-2001 season that correctly predicted the winners of the Premier League, Championship, League One, League Two and National League, as well as the Scottish Championship, Scottish League One and Scottish League two divisions. He also thought that Surrey would win the county cricket championship, Leicester would win the rugby union Premiership and Gloucester would win rugby’s NatWest Trophy.

As if all of those predictions weren’t tricky enough, he made life even harder for himself by selecting a few individual matches to bet on. Luckily for him, Arsenal, Falkirk and Hibernian all did exactly that when he needed them to. Those wins meant that he was praying for a Bayern Munich win when the German side went up against Valencia in the 2001 final. He must have been in bits when the match went to penalties but over the moon when Oliver Kahn put in a Man of the Match performance to hand Die Roten a famous win. Remarkably, it was the second big accumulator he’d won after picking up £157,000 when Manchester United won the same competition in 1999. The odds of him winning his half a million were 1.6 million to one, so he’s probably furious he only bet 30p! 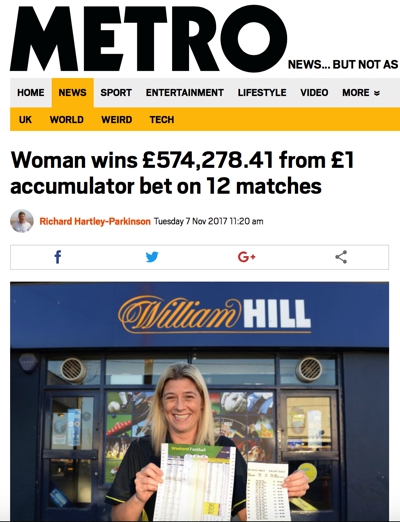 If that story is one that gives every punter hope then this next one will perhaps stop some people from over-thinking things. A lady in Leysdown-on-Sea ended up winning over half a million quid thanks to a £1 bet on a twelve-team accumulator. What’s truly amazing about the story, though, is the fact that she essentially guessed all of her selections. She only started doing accas because her husband and son watched football every weekend and she was bored of feeling left out. Admittedly, she’d started placing those sorts of bets about six years before, so it wasn’t exactly a completely random wager, but even so you have to be impressed at pulling something like that off.

What I personally find amazing is the fact that she didn’t even select any draws. When I place an accumulator bet I always chuck a few draws in, simply because I feel as though the odds are against every match getting a result. This lady, on the other hand, wasn’t bothered about being decisive with her selections. The longest odds of the bets that she placed were 4/1 on Burnley to beat Southampton. She also split things right down the middle in terms of whether or not she thought home advantage would play a part, selecting six home wins and six victories for the away teams. The lady’s husband had apparently been doing £1 accumulator bets since he was eighteen and not even come close to earning the same sort of winnings. They do say that women know best!

It’s not just football that you can place accumulators on, of course, and this story from 2008 proves as much. Fred Craggs decided to place an eight-leg accumulator over his sixtieth-birthday weekend and didn’t even bother to keep an eye on the horses as they raced. In fact, he only found out he’d won after he went into a different betting shop the following day and placed another bet, asking them to check his ticket whilst he was there. Craggs was a regular bettor and used a combination of instinct and form to help him select his horses. He might well have wondered if fate had anything to do with when he realised that the first horse of his bet was called ‘Isn’t That Lucky’ and the last was named ‘A Dream Come True’.

At the time, William Hill, which was the bookmaker he placed his bet with, limited the number of horses that you could bet on in an accumulator to eight, which was probably a wise decision considering their liability had he put a few more names on his betting slip. They also limited winnings to £1 million, which ended up saving them close to another half a million pound. The odds of Mr. Craggs’s bet coming in were 2.8 million to one, so he would have picked up £1.4 million if not for the bookie’s decision to limit the amount winnable from an accumulator bet. Fred was unlikely to have complained about £1 million coming in for just a 50p bet, I imagine. 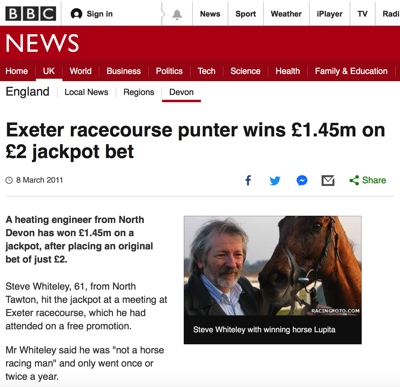 Sometimes promotions end up with you going to some boring event that you want to leave as soon as possible. It’s unlikely that Steve Whiteley thought he was going to have a boring day when he won a promotion to attend Exeter Racecourse in 2011, but even he wouldn’t have foreseen what was to come next. Despite declaring himself to be ‘not a horse racing man’, Mr. Whitlock decided to have a £2 bet on the Tote Jackpot, which required punters to correctly predict the winners of six races from across the course of the day. Because The Tote is a pools betting system, the winnings are shared between however many people win but there were no other punters left in it when the sixth and final race got underway.

Having already seen Semi Colon, Black Phantom, Ammunition, Mr Bennett and Lundy Sky romp home, it was a nervous few minutes for the punter when Lupita began running in the last. He revealed afterwards that he’d only picked that horse because the name of the jockey, Jessica Lodge, stuck in his head. It was just as well he hadn’t gone off form, given that Lupita had failed to win in the previous twenty-six races it had run on Exeter Racecourse and that Lodge had never been a jockey on a winning ride. The lowest odds of any of the horses Whiteley bet on were 2/1, with the longest being 16/1. The £1,445,671.71 that Mr. Whiteley won remains the largest Tote Jackpot win to date.

I haven’t included this bet because of the size of the winnings, with £223,000 quite small in comparison to some of the other bets on this list. That’s to say nothing of the fact that a £5 stake is remarkably high when you look at it compared to the 30p bet that won a punter half a million back in 2001. Instead, I decided it was worth a mention because of the sheer number of bets that needed to come home in order for it to be a winner. A bettor from Suffolk placed his £5 stake on a TWENTY-FOLD football accumulator back in 2016, at odds of 41,548 to 1.

The unnamed punter placed his wager with BetVictor and must have been pleased to see all of Liverpool, Chelsea, Tottenham and Manchester City bag wins for him. He might have been slightly nervous when watching Manchester United take on Crystal Palace, however, because it’s actually surprisingly rare for all of the big guns to win their matches on the same weekend. Nobody told Zlatan Ibrahimovic that, though, and the Swede scored the winner for the Red Devils in the 88th minute. West Ham and West Brom also won to give him seven Premier League wins out of seven, but he still required another thirteen victories for his bet to come home. It ended up going down to another Spurs game the following weekend, with goals from Dele Alli and Danny Rose sending him to dreamland.

Again, this isn’t the biggest win nor the smallest stake, but it’s still worthy of a mention because this particular bet resulted in Coral having to make their largest ever pay out for a horse racing bet when it came home in 2017. The male punter placed a £19 bet online on five different horses that were running at Punchestown one Friday afternoon and didn’t even realise he’d won until returning from a night out in the early hours of the morning. He described the win as the ‘the realisation of a lifetime dream’, having placed countless accumulators over the years without ever seeing any of them come home.

It’s fair to say that he started early, with his dad being a bookmaker and getting him into betting when he was younger. The man from Leicester won his first ever bet in 1986 when Desert Orchid won the King George, but it was Das Mooser, Woodland Opera, Definite Ruby, Bacardys and Canardier that won him the big bucks at Punchestown. Canardier was the horse with the longest odds at 33/1, but both Das Mooser and Bacardys were 10/1 punts. Unsurprisingly, Coral weren’t all that. Bothered about having to make the payout, knowing that ‘’small-stake big-win’ bets’ are the wagers that keep their books in the green.

The final accumulator I’ll mention on this list is one placed by a man named Darren Yates back in 1996. Again, neither the amount of money won nor the size of the stake are particularly noteworthy, but the achievement of someone involved in helping the bet come off was definitely something that ended up in the news. Mr. Yates won his bet thanks to the fact that Frankie Dettori managed to win all seven races he was a jockey in at Ascot on the 28th of September that year, making history in the process. No one had ever won all seven races on the same day at Ascot and the victories made the Italian a household name.

The seven winning horses for Dettori were Wall Street, Diffident, Mark of Esteem, Decorated Hero, Fatefully, Lochangel and Fujiyama Crest. Though they had odds ranging from 5/4 through to 12/1, the cumulative odds were 25,051-1. The chances of Dettori pulling of the seven wins were compared to the likes of a golfer racking up eighteen birdies during the same round or a boxer being knocked down in every round but still winning the bout. The closest anyone else had been was when Gordon Richards won the six races on the card at Chepstow once. History for the jockey, an enormous win for the punter.