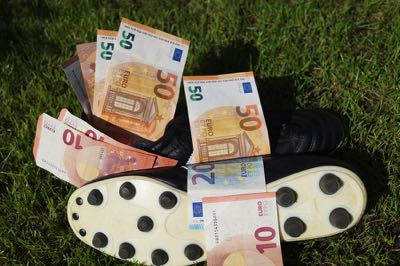 Ante-post betting isn’t necessarily something that a lot of people would associate with football, but in actual fact it’s just as easy to understand as it is in the more popular sports for such wagers, like horse racing. Just as you might begin to think about the bets that you’d like to place on the Grand National when the race is a few weeks away, so too can you think of betting on football tournaments as they appear on the horizon. In, fact there are arguably more bets to be placed on football competitions than on major horse races.

That comes about courtesy of the fact that you can bet on the likes of the Top Scorer for the tournament in addition to the team that you think is going to win it. Of course, the very nature of ante-post betting is such that which bets you consider to be placed ante-post will depend on how you define it. They are bets placed ahead of something getting underway, so is an accumulator placed on the Friday before a weekend’s Premier League football an ante-post bet? We’re going to look here at longer-term wagers, but the same rules tend to apply.

What Is Ante-Post Betting in Football? 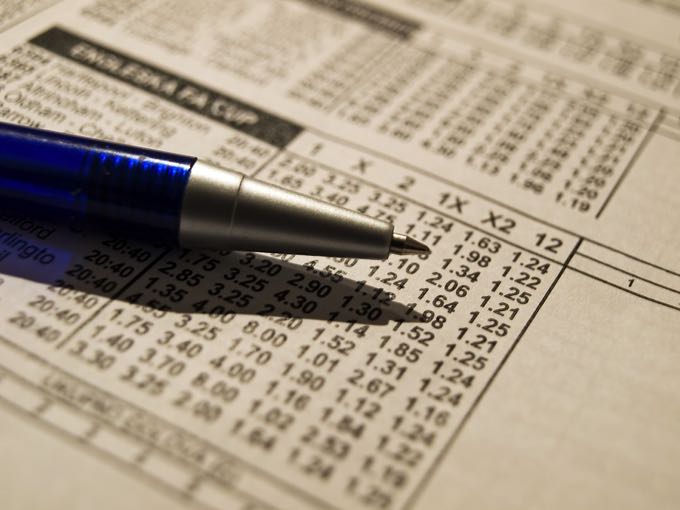 As we touched on in the intro, ante-post betting is technically any bet placed ahead of a competition getting underway. As a result, bets placed on a football match the day before kick-off will be considered to be ante-post wagers by some. For others, they are not true ante-post bets because they’re being placed once you have additional information about the form of both teams and the injury situations etc. So it is that we are looking at ante-post bets as being those wagers that are placed on competitions well ahead of time.

A bet on Liverpool to win their Premier League match in three days time will have far more information behind it than a bet on Liverpool to win the Premier League outright, for example. Bets on the likes of the winning nation in the World Cup or European Championship are definitely ante-post wagers, presuming that they’re placed several weeks, if not months, before the tournament gets underway. They are bets placed with a limited amount of information available to help you figure out what you should be betting on, basically.

In terms of actually placing ante-post bets on football tournaments, it’s a relatively easy thing to get your head around. The first thing you’ll want to do is to figure out what it is that you want to bet on, given there can be a wealth of different options available depending on your bookmaker of choice.

Let’s have a look at betting on the Premier League, for example, and the different things that you can choose to spend your money on in terms of placing bets before a ball has been kicked and information on likely outcomes is available:

Depending on the competition that you’re betting on, you could also place a wager on the likes of which player will rack up the most assists or which teams will be promoted at the end of the campaign. Each competition has its own quirks and unique bets that you can place, so it’s always worth looking in to what you can bet on. Just because the tournament hasn’t got underway by the time that you’re looking to place your bet, that doesn’t mean that isn’t still plenty of information available to help you decide where to put your money.

All you then need to do is to head to your bookmaker’s website, find the competition that you want to bet on and place a wager on the outcome that you think is going to happen. Whilst most bookmakers offer the same sort of markets most of the time, some may offer different ante-post options to others so it’s always worth shopping around. Your job is simply to find the market that you want to bet on, make your selection and place your bet as you would any other wager that you’d place with an online bookie. 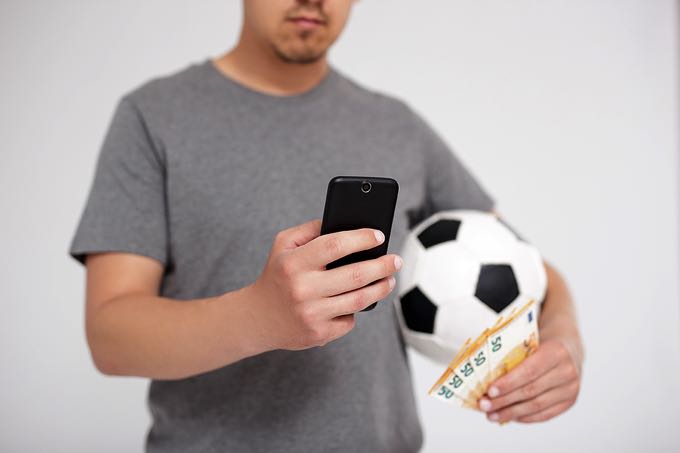 If you place a wager on a horse race, you know exactly what Each-Way means. In a sport such as horse racing, it covers the possibility of you horse winning as well as them missing out on the top stop but finishing in the places. What does it mean in the context of ante-post football betting, though? Essentially, you’re giving yourself a little bit of leeway in terms of whether or not the team or player that you’re betting on will do exactly what it is that you’ve placed money on them to do, such as win the group that they’re in.

Imagine that you’ve placed a bet on Harry Kane to finish as the Premier League’s Top Scorer, for example. As the season wears on, Kane is playing well but Mohamed Salah is scoring at an unbelievable rate and it’s clear that the Egyptian is going to end the season as the top-flight’s Top Scorer. If you’ve placed an outright bet on Kane then your money will be lost should the England forward not outscore Salah by the end of the campaign. If you’ve placed an Each-Way bet on Kane, however, then you’ll get at least some money back provided he finishes second in the scoring charts.

The same sort of thing applies to outright winners of tournaments. A bet on Liverpool to win the Premier League would require the Merseyside club to do just that if you are to win any money. An Each-Way bet on them to win it, however, would give you a little bit of leeway. Just how much leeway you’ll get will depend on the bookmaker that you’ve placed the bet with, with some only paying out on Each-Way bets to two places whilst others might decide that they’ll pay out on the proviso that the team you bet on finishes in the top four.

What You Can Bet On 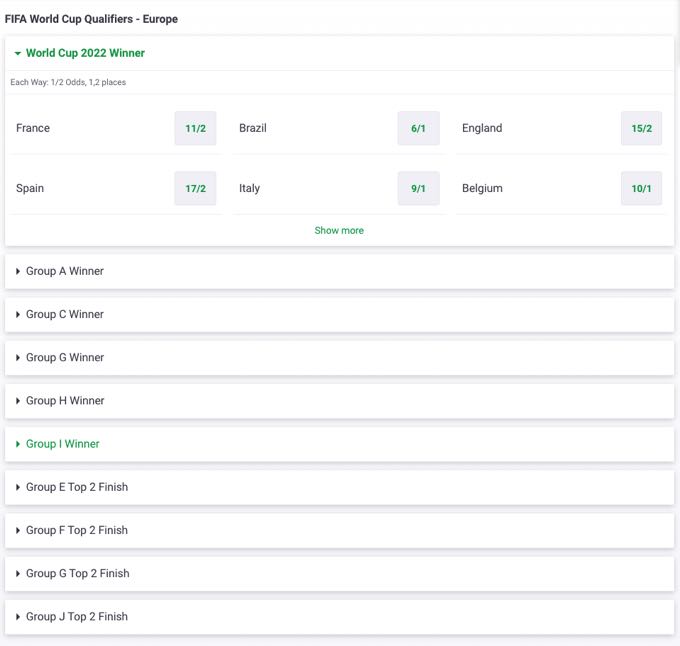 We’ve already touched on this, but knowing what you can bet on is an important part of making the most of the ante-post betting market. As you might expect, the exact things that you can place a wager on will differ from competition to competition, but it’s always worth exploring your options and seeing if a different bookmaker might offer you an interesting alternative market that you haven’t thought about before. The vast majority of football competitions will have the same markets available on them, which are as follows:

After that, the added options open to you will be dictated by the competition. There’s no point in Premier League ante-post betting offering wagers on teams to get promoted, for example, when the top-flight doesn’t offer promotion. Equally, you’re not going to see a relegation market when you’re looking at wagers you can place on the European Championship. Some competitions might not seem all that similar but will have the same sorts of markets available pre-tournament, such as the Champions League and the World Cup.

Because of the format of the Champions League as well as that of the World Cup, both competitions can offer punters the chance to bet on which team will win the various groups that they’re placed in. Even though one of them is a club tournament and the other is an international one, they will both have outright winners as well as individual group winners. That is in addition to the Top Scorer, Player Of The Tournament and outright winner bets that you’ll be able to place on them ahead of them actually getting underway.

When Your Player Doesn’t Play

It is not out of the realms of the possible that you’ll have placed a wager on a player to be crowned the Top Scorer in a competition only for them not to make an appearance as the tournament goes on. Whilst this is far less likely in something like the Champions League, given the length of time that the competition takes place over, it isn’t an impossibility. There can be all sorts of reasons why your player isn’t selected to play as well, so it’s not even as if it’s just down to them being injured early on and not playing.

Injuries are the most common reasons for players to miss an entire tournament, but sometimes it can be something as simple as the manager that favoured the player being sacked ahead of the tournament’s commencement, with the new manager not liking them enough to play them with any sense of regularity, if at all. If that were to happen prior to the start of a World Cup, for example, then it isn’t exactly an outrageous suggestion that the manager might make it through the entire tournament without ever picking the player that you’ve bet on.

The bad news is, this usually means that your stake money is lost. Just as a horse can be bet on ante-post but then not actually run in the race that you’ve bet on them winning, so too can a player have money wagered on them only to never kick a ball. In both cases, the ante-post rules say that your money is lost and there’s nothing that you can do about it. It is frustrating, but that’s the risk of placing a bet so far in advance. It is the constant measuring up of the benefit of getting longer odds over having less information.

Just as with horse racing wagers, though, bookmakers do sometimes make offers in which they’ll waive those ante-post rules. In order to take advantage of such a thing, you’ll need to place your bet in the sweet-spot between too far in advance and too close for it to be considered to be an ante-post wager. We’re normally talking a week or so before the tournament is due to get underway, at which point bookies are more interested in getting people to place bets than they are in screwing people over thanks to rules that they might not even realise exist. 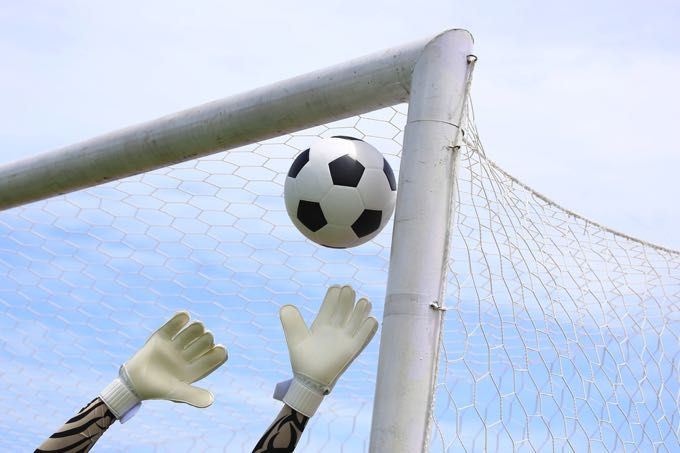 The Golden Boot, meanwhile, is usually a specific award that is given to an individual player. As a result of this, two or more players tying on goals scored during the tournament will be separated courtesy of a statistic such as assists or minutes played. An extra element is added to the awarding of the Golden Boot, meaning that dead-heats are not possible. This is an important thing to bear in mind not because it will change what you’ll bet on, but because it might help to explain why your wager wasn’t a winning one when your player and three others all scored the same number of goals.