Unibet are a company that have quietly been there in the background for some time now, having been founded in 1997. They have since become part of the Kindred Group, which also owns numerous other online gaming companies like 32Red and Stan James. Good stock, then, meaning that you can be extremely confident that your money is safe and that you’re working with a company that knows what they’re doing.

That is evident in the fact that they are Sweden’s biggest betting site, boasting over ten million customers from over one hundred countries around the world. Ten million people can’t be wrong, as the saying goes, though it is worth noting that you can see the company’s Scandinavian roots in the style of the website. That’s not necessarily a bad thing, of course. Given that I spend half of my life looking at bookmaking websites, I appreciate it when I see something a bit different from the chasing pack! 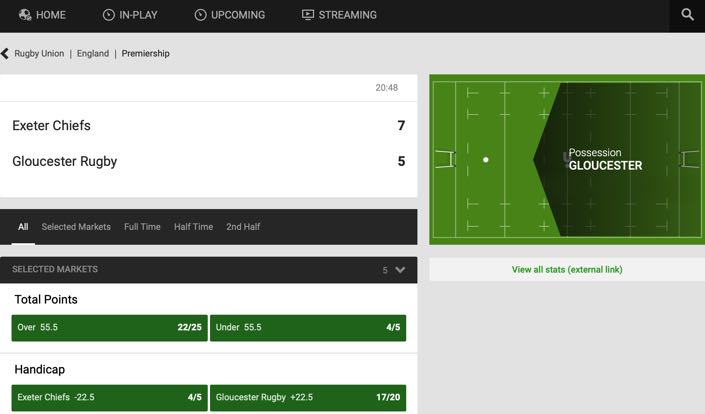 Difference is often a good thing, offering you something different and giving you another option when it comes to who you should place your bets with. That said, a bookie can offer a site with Sanskrit and braille options but it won’t get many users if it doesn’t have good features. What does Unibet offer on that front, then?

As with most bookmakers worth their salt, Unibet knows that Live Betting is where the action is really at. That’s why they put live events front and centre on the homepage of their sportsbook, meaning that you can see what you can bet on with ease. They tend to put the events that they believe will be the most popular at the top of their live betting section, so expect to see football matches followed by tennis. We’re not talking just about Premier League football here, either. I once logged onto my account on a morning of the off-season to be presented with an Under-18s friendly game between Rijeka and Eintracht Frankfurt.

What I like about the way that Unibet sort their Live Betting is that they don’t immediately go for the obvious. Yes you’ll be able to find a link straight to Premier League matches that are taking place, but the homepage will also show you live golf tournaments that are underway at that moment or athletics championships that you might want to have a punt on. That appeals to me as I normally know what I’m going to bet on so quite like being informed if there’s something I might not have thought of. If you also tend to know what you’re going to have a wager on then you might want to click on the ‘In-Play Right Now’ button, which you’ll find on the lefthand side of the sportsbook homepage.

’In-Play Right Now’ will present you with all of the events that are, you guessed it, in-play at the moment that you click on the link. They’re separated into sport and the quickest way to get to different ones is by clicking on the name of the sport, such as ‘Football’, which will collapse all of the matches and show you the next sport on offer. Collapse them all and you’ll have a list that you can quickly move through to find your chosen event. Footy, tennis, golf and so on are obvious options, but you’ll also discover that the likes of beach volleyball and handball are available to bet on, if that’s the sort of thing that tickles your fancy.

Unibet have their own Live Streaming channel that they’ve imaginatively called ‘UTV’. Once you’re on the sportsbook homepage you’ll see a list of quick links across the top, including a link to ‘Live Streaming’. Click on that and you’ll be able to see all of the events that you can watch, including any that are coming up later that day. If you’d like to watch a live event then all you need to do is have money in your account or have placed a bet in the previous 24 hours.

With Unibet, Cash Out is a feature that is available on single bets that are still live. You’ll find the option to Cash Out under the drop down menu underneath your original bet. As always, if you have any problems then the best thing to do is to contact Unibet directly. The important thing is that it’s an option!

Unibet’s sports coverage is pretty fantastic, actually. In terms of sheer numbers, they offer odds on over thirty sports. That includes things like ‘Winter Sports’ and the Winter Olympics, meaning that individual events will add to the number of things you’ll be able to bet on. In among those thirty-plus sports are disciplines not covered by every bookie, such as trotting, pesapallo and beach volleyball. You can also have a flutter on TV events and political specials, if that’s the sort of thing that floats your boat.

It goes without saying that all of the most popular UK sports are on Unibet’s list. Tennis, horse racing, greyhound racing and cricket all join the daddy of the lot, football. It’s worth noting that Unibet aren’t merely giving a passing nod to these sports, either. Everything from the top-flight through to the Isthmian League Premier Division is offered in England, to say nothing of the number of other countries whose football you can bet on. This includes the likes of Azerbaijan, Georgia, Estonia, Kazakhstan, Slovenia, Venezuela and more. In short, you’re only going to struggle to find a football league to bet on if you’re particularly fussy with what you go for.

The same depth of coverage applies to most other sports, too. A look at cricket will offer you bets on the Caribbean Premier League, the NatWest T20 Blast and international test cricket. Tennis includes events such as the ATP tour, the ITF tour and WTA matches. You’ll also be able to bet on e-sports, meaning that you’ll be able to place a bet pretty much any time of day or not provided you’re not too fussy what it is that you’re going to bet on. Unibet might not have the name recognition of some of the biggest bookmakers in the industry, but their coverage is genuinely very impressive.

As I mentioned in my intro, Unibet was formed in 1997. The website is operated by Platinum Gaming Limited, with Unibet itself being a subsidiary of the Kindred Group. This is an interesting little tidbit of information as the Kindred Group was previously known as Unibet Group Plc. That is indicative of the fact that the conglomerate was formed from Unibet buying up numerous other companies, including lots of online gaming rivals. Nowadays the Kindred Group is formed of Unibet alongside other companies you’ll have heard of, such as Stan James, 32Red and the Danish company Bet24.

The company’s founder was a man named Anders Ström, who should not be confused with the cross-country skier of the same name who died in 1986. Born in 1970, Ström attended Karlstad University before founding Unibet and going on to create a veritable online gaming empire. The current CEO is Henrik Tjärnström, who replaced Petter Nylander back in 2010. A lot of these names will mean nothing to you, of course, but I believe in the importance of knowing who it is that you’re putting you’re trust in. Both Ström and Tjärnström are on Twitter, which is an openness that not all online gaming executives are willing to expose themselves to.