Some companies are steeped in the history of the bookmaking world. They begin life on a racecourse or in a greyhound stadium and use their experience to branch out into other sports that people like to bet on. Others start out in a different part of the industry and then develop to incorporate a sportsbook once they feel like they’ve earned themselves a decent reputation. If you’ve never heard of Royal Panda Sports before then that’s because they opted for the second route, establishing a top-notch online casino before realising that they’d be able to offer punters a decent set of sports bets, too.

Because of the companies origins as an online casino, you’ll find that they approach the world of sport in a refreshingly different manner. Their take is actually a wee bit more exciting than your standard bookmaker, which is no surprise when you consider the fact that people who tend to play roulette or blackjack enjoy a fair bit of excitement and often don’t have the patience for slow, boring approaches to things. If you like your betting experience to be a little different to the norm and think the name Royal Panda Sports sounds fun rather than odd then I’m confident you’re going to enjoy betting with this company.

You can make things as different as you want as a bookmaker but ultimately if you don’t give the people what they want then they aren’t going to use your services. With that in mind, here’s a quick look at the things you’ll be able to do with Royal Panda Sports.

Given Royal Panda Sports is such a young company it’s no major surprise that their features are found a little bit wanting when compared to more established alternatives. At the time of writing there is no Cash Out option on your bets, for example, nor can you live stream sports that you’re hoping to bet on. All of that is a bit disappointing, but I’m not convinced it’s a reason not to bet with them. After all, I’m a firm believer in the idea of betting with one company if you like their odds and how they operate and using another company’s Live Streaming option for the actual watching of the sport.

The good news for fans of Live Betting is that Royal Panda Sports ave a very decent In-Play betting section. Some sports lend themselves better to In-Play betting than others, so it’s those that you’ll find yourself able to bet on as they take place. Sports like football, tennis and basketball are obvious contenders, with others such as water polo, baseball and ice hockey also on the list. If you’ve spent your entire life as a bettor working with the big boys of the industry then you might find Royal Panda Sports’s offering to be a little disappointing, but then you’ll probably have turned to them because you’re looking for something a little bit different. On that front I’m sure you’ll be pleased enough with how they operated when it comes to betting live. 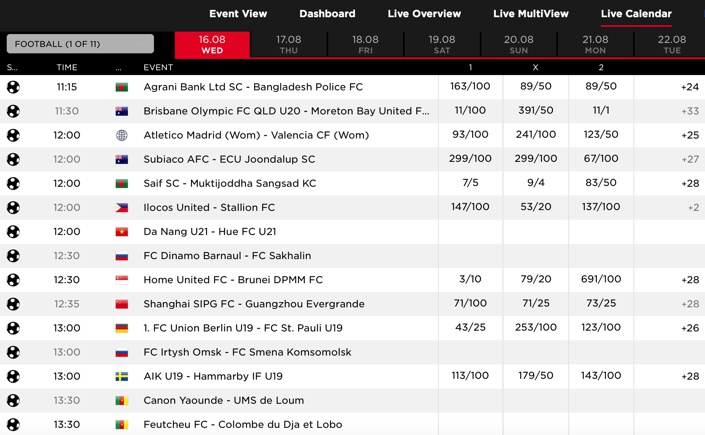 The company’s website takes a little bit of getting used to, but as I’ve already mentioned they’re coming at it from the angle of an online casino first and foremost. It might take you a while to get your head around how it works, but once you have you’ll no doubt be able to navigate it like a pro. When you do you’ll find that they offer coverage of some sports I’ve literally never even heard of and I’ve been in this business for some time. I didn’t even know what Vainglory was, for example, let alone that you could place a bet on it. Likewise I’ve heard of World of Warcraft but had not previously found a bookie that would give me odds on it.

It’s entirely possible that you’ve long been a massive fan of biathlon and have been dying to find a bookmaker that would let you bet on the International Biathlon Union World Cup. If so you’ve got one over on me, given that I had to turn to Google merely to find out what on earth it was. There are so many weird and wonderful events that you can bet on through Royal Panda Sports that if you’re the sort of person who enjoys having a flutter on the unique or bizarre then you’re going to be delighted. It’s not all computer game based stuff, either. Most companies will let you bet on slightly unusual sports such as Aussie rules football and speedway, but only a few offer the likes of floorball, Alpine skiing and NASCAR racing.

If you’re a fan of more traditional sports then you don’t need to turn away in disgust – you’re still covered here. Obviously you can bet on the UK’s mainstay sports such as football, tennis and cricket. In fact, the only slight disappointment is that Royal Panda Sports don’t currently have horse racing on their roster of sports you can have a flutter on. Still, most bookmakers cover the Sport of Kings and Royal Panda Sports have undoubtedly made the decision to offer something completely different to ensure that they capture your attention in a very crowded market. They’ve definitely won me over and I will know exactly where I need to go the next time I’m hoping to place a bet on the latest craze in computer games…

Let’s be honest, Royal Panda Sports isn’t exactly one of the best known companies in the world of online gambling. You’d be forgiven for wondering where they’ve come from or why you should bet with them. One of the chief reasons you won’t have heard of them if you’re mainly in this for betting on sports is that their sportsbook only launched in 2017, meaning that it’s not exactly as well-established as the biggest names in betting. Regardless, they’ve done well to get their name out there by sponsoring Queens Park Rangers Football Club and covering some wild and whacky betting markets.

They have been an online casino for more than a decade, though, so there’s no question that they’re a reliable and trustworthy company. After all, I wouldn’t have them on my list of recommended bookmakers if I didn’t think as much. They are regulated by the Malta Gaming Authority and have a UK Gambling Commission licence, meaning that they have to obey the strict and stringent rules laid out by the both of them. At the time of writing their sportsbook is only available in the UK, so you’re getting a brand new company that is aimed squarely at your market and offering something refreshingly new and interesting. I definitely think they’re worth a look.