If you’ve read my review of BetOnBrazil then you’ll have read my take about the different ways that bookmakers attempt to persuade people to use their services. Having really good offers is a typical approach, but that’s not necessarily sustainable from a financial point of view. Not all bookies have a history and reputation to fall back on in the same way that Ladbrokes and William Hill do, either, so they need to think outside the box. A clever way of doing that, as evidenced by Sport Nation (formerly known as BetOnBrazil), is to have an associated with a celebrity. For them it’s former footballer Alan Brazil, whilst for RealDealBet it’s with retired boxer Evander Holyfield.

The man best known to non-boxing fans as the person who had part of his ear bit off by Mike Tyson during a fight has happily lent his name to the enterprise, allowing them to have such lovely puns as ‘knockout betting offers’. How much he has to do with the day-to-day running of the business is debatable, though I’d be amazed if he knows all that much about it. Not that it matters, of course, as I’m not too sure I’d want Evander Holyfield figuring out the odds of the 14.10 at Yarmouth on a Tuesday afternoon. He’s there to be the face of the sister company of 10bet and I can’t pretend I don’t like it. It’s a bit of fun and I reckon we all need more of that in our lives.

Fun is one thing, celebrity endorsements another. When all is said and done, though, it’s the features offered by a bookmaker that make all the difference as to whether you’ll use them or not. Thankfully, RealDealBet have enough to land a knockout blow to their opponents. (I love a good pun, deal with it).

Whether you like to place single bets or accumulators, you’ll be able to take advantage of both Cash Out and Partial Cash Out options through RealDealBet. You can’t use it on System bets or the likes of Forecast or Tricast bets, nor can you Cash Out bets placed with Free Bet tokens, but that’s all fairly standard stuff nowadays, to be honest. The good thing is that you can look to Cash Out both In-Play bets and ones you placed ahead of the game, which is a handy combination for those of us that like to keep an eye on the markets an event progresses.

If Cash Out as a feature changed the game for bookmakers then Partial Cash Out changed it all again. The ability to cash in on a chunk of your bet whilst also leaving part of it riding is brilliant, giving yourself the chance to at least break even or potentially make a profit before also seeing some of the bet run its course. RealDealBet’s choice to allow you to take a Partial Cash Out on multiple bets is a really nice feature, meaning that you can place an acca knowing that if the first leg or two come home you can take a slice of winnings without feeling that you’re throwing away the rest of the bet or risk losing it altogether.

RealDealBet’s Live Betting section isn’t the biggest on the market, but what they do cover is covered in a fair amount of detail. Football is the sport that they cover most successfully, in my opinion, but you can also bet In-Play on the likes of volleyball, ice hockey and futsal.

Tennis is a sport that also lends itself to a Live Betting experience, so it’s no surprise to see that I can bet on over 103 events at midday on a random Friday afternoon. The company claims to offer betting opportunities on over 18,000 events every sing month, which is not something to turn your nose up at. 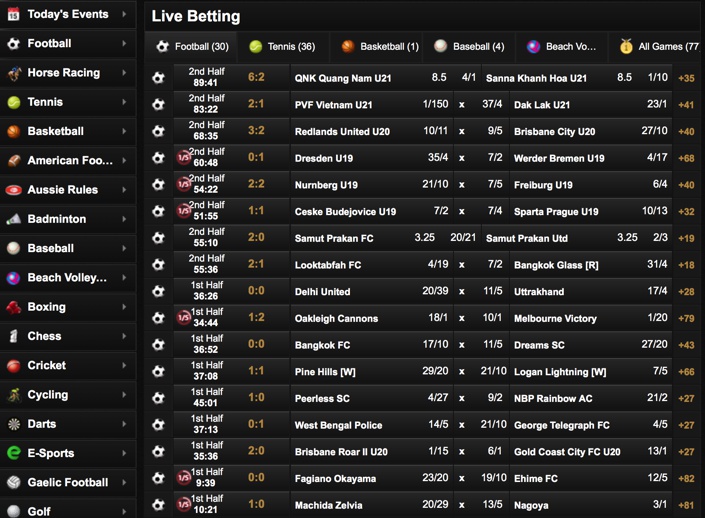 Given that RealDealBet is the sister company of the perhaps slightly better known 10bet, it’s not exactly a shock that they offer markets on a fair amount of sports. In fact, their sportsbook is good enough to rival some of the biggest names in the industry. Any bookmaker worth their salt will offer odds on the favourites of the UK market such as football, tennis and horse racing, so RealDealBet keep up with the best of them on that front. Yet not every bookie will cover slightly more random sports, so it’s good to see Evander Holyfield pull out all of the stops by ensuring the company using his name go the extra distance.

It goes without saying that boxing is on the list of sports covered by RealDealBet. After all, what kind of company would bring Holyfield on board but then not bother covering the sport that made him famous? There are the mainstream sports like cricket, rugby, basketball and American football in there, too. Where I’m most impressed with their coverage, though, is when it comes to the significantly less fashionable sports. These include the likes of beach soccer, chess, speedway, trotting and water polo. When was the last time you placed a bet on a chess match, a horse trotting event and a water polo game all via the same company? It’s a rare occurrence, I would imagine.

As with any betting company, I hesitate to say that they’ll cover every single sport you’ll ever want to bet on. Nevertheless, they equal most companies and outstrip plenty of their rivals. If you’re someone that really cares about scuba diving competitions or betting on obscure point-to-point racing then they might not be for you. Equally those of you that enjoy watching things on a live stream and don’t want to have to bet with one company and watch via another may find RealDealBet’s lack of the medium frustrating. I’d be very surprised if you felt their sports coverage was lacking, however, so I’m quick to recommend them on that front.

Aside from partnering up with Evander Holyfield, what else is there you could do with knowing about RealDealBet? Well, first and foremost, they’re part of the Blue Star Planet Limited family that includes the previously mentioned 10bet. As with many other betting companies nowadays, Blue Star Planet Limited are based in Malta and have a UK Gambling Commission licence that allows them to offer their wares to the likes of me and you.

Their deal with Evander Holyfield came into play in 2016, but the company behind RealDealBet has been in the business for a lot longer than that. They have more than a decade’s experience of working in the online gaming world, offering punters the chance to have a bit of fun and win some money at the same time. Their decision to team up with the five-time world champion of boxing is proof, were it needed, that they know how to pack a punch and have a drive to ensure that they battle with the best of the best in a very competitive market.