When you spend as long as I do looking through different bookmakers and their respective online offerings it takes a lot to catch you attention. Generally speaking most of the big boys are very similar to each other, covering the same sports and offering most of the same features. It’s not even uncommon for the majority of bookies to have the same offers and promotions to each other, which isn’t surprising when you think that they don’t want to be outdone by their rivals. Because of that it’s really refreshing when you stumble across a bookmaker that takes a different approach to others.

That’s exactly what I found with RaceBets, though, and I think that a few of you might be keen to see what they offer. The major thing that sets them apart from other bookies is the fact that they specialise in just one sport. If you’re the sort of punter that likes to bet on a host of different events then they obviously won’t be to your taste, but if you like betting on the Sport of Kings then I think you’ll be pleasantly surprised by what they have to offer. As always with such things, I constantly recommend that you have a number of companies that you use for your betting, so I’d suggest even those of you that like to be on a number of sports have an account with RaceBets for when it’s time to have a flutter on the horses. 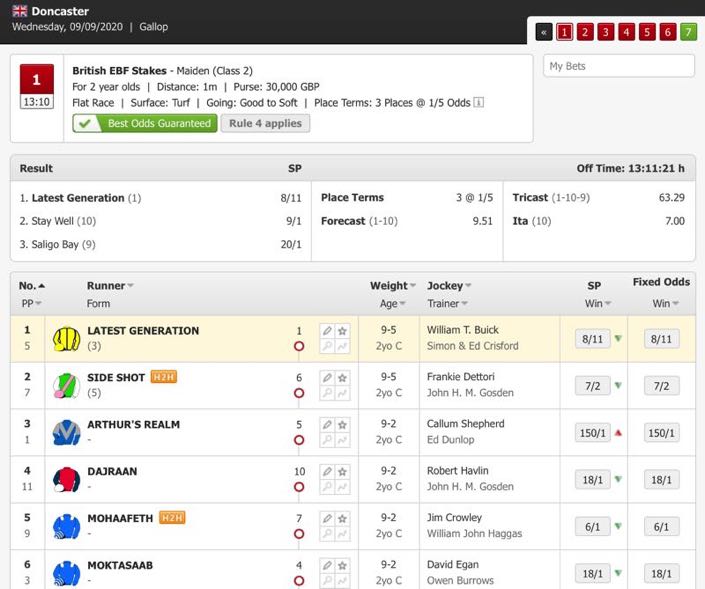 With the majority of bookmakers the things that they offer are largely similar. What sets some apart from others are the features that they have on offer for punters or, in some case, the lack thereof. You’re like to be interested in RaceBets because you want to bet on horse racing more than any other sport, but will they let you do so in a way that appeals?

The simple truth is that bookmakers often don’t offer live in-play betting on horse racing because that’s an incredibly difficult thing to do. Similarly cashing out horse racing bets isn’t the easiest of things to do so it’s currently quite rare for bookies to allow customers to do it. Often they’ll allow you to Cash Out an accumulator in between events, but not a bet as the race is taking place. Consequently neither of those are features offered by RaceBets. What they do offer, however, is Live Streaming and this is, in fact, a feature they excel at.

RaceBets offer top quality streams from all over the world via their excellent Live Steaming portal. You’ll be able to see events from the likes of South Africa, Switzerland, America and Canada. There are plenty of bookmakers that only offer UK and Irish racing via their live streaming service. In comparison there are actually very few races that you won’t be able to watch live with RaceBets, which is the sort of added service you get when you’re dealing with a speciality bookmaker. The Live Streams are also integrated well with the betting page, so you can have a look at your options at the same time as checking out how they’re looking.

As I’ve already mentioned, RaceBets only covers horse racing. If you want to stick a bet on the tennis, rugby or football, therefore, you’re going to want to turn to another bookmaker instead. If horse racing is something you like to have a flutter on, however, then I can’t recommend their service highly enough. As I type this I can go off and place a bet on racing from fourteen different countries, including lesser covered ones like Norway, New Zealand and Chile.

Most of the big name bookmakers have a leaning toward one sport or another. Betvictor, for example, was bought by racehorse owner Michael Tabor in 2014, so their horse racing coverage is very good indeed. The problem for these companies is that they have to become a slight jack-of-all-trades in order to offer everything to everyone. Consequently their coverage of even their most favoured sport is solid rather than exceptional. 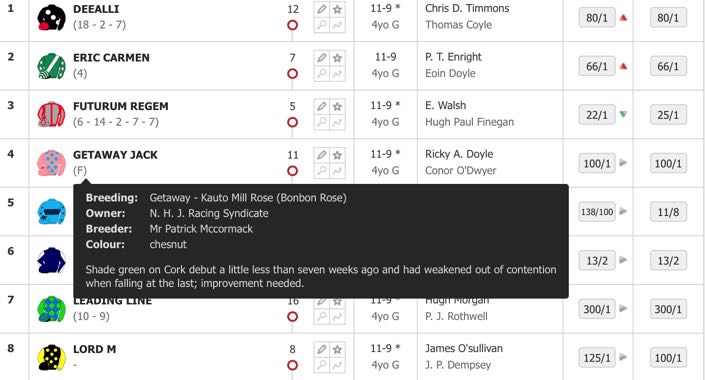 That’s twisted on its head for RaceBets. The fact that they only cover racing means their coverage is close to peerless. Go to a race, pick a horse you’d like to know more about and – if you’re on a desktop – hover your mouse over the horse’s name. You’ll be told their lineage, their own, the breeder, what colour they are and the amount of winnings they’ve won thus far. You’ll also get a more detailed look at their form heading into the race, which is very handy indeed.

Whilst that information isn’t available for every race that’s out there, with those more further afield offering more basic info, it’s still a huge improvement on most jack-of-all-trades bookmakers. When looking at the more popular racecourses, especially in the UK and Ireland, you’ll also see a full Racing Post preview of the event. Handy if you’re just starting out in the betting world and aren’t too sure what you’re doing when it comes to having a wager on horse racing. In a similar vein you’ll also find a section at the top of the homepage entitled ‘Editorial’, with blogs and tips for all types of race.

I’m genuinely a really big fan of RaceBets. For a relatively new company when it comes to the British market I think they’ve done very well to establish themselves as reliable in a relatively short space of time. I wasn’t shocked, therefore, when I discovered that they’ve been in existence since 2005, becoming the largest bookmaker in Germany just two years later. The Germans are famed for valuing efficiency, which probably explains why the RaceBets site is so easy to use and comprehensive in what it offers.

The main company is officially known as RaceBets International Gaming Limited and is regulated by the Malta Gaming Authority. On top of that they also have a UK Gambling Commission licence for the purpose of offering their services in the UK. They’ve been operating on these shores since 2012 and punters can bet through them on more than 250,000 races every year. Those of you that care about the racing industry will be pleased to know that German Racing became a shareholder in the company back in 2010 and RaceBets have been investing part of their returns back into the industry ever since.