Mobilebet is the sister site to ComeOn, so you can expect to find many of the same features that you’ll find there. It’s worth having a quick read of my review of ComeOn after you’ve read this one, so you can get a bit of an idea of which one is more likely to appeal to what you’re after. You can have an account with both companies, of course, just do bear in mind that they have the same parent company. A key question when you know that sites are linked is ‘why?’ What purpose would there be to having two bookmakers that belong to the same company?

The basic answer is that they both offer something slightly different to each other. In the case of Mobilebet it should be rather obviously from the name what it is that they concentrate on. The purpose of this site is to target customers who tend to prefer betting with their mobile or tablet than their desktop computer, so the entire site is set up to make life as easy as possible for users on the go. That’s not to say that you can’t use your desktop, of course, and I do so regularly. It’s just that the site is optimised for use on smaller devices so you’ll probably find it’s more fun to use that way.

Whether a site is optimised for use on a mobile or a computer, it’s not going to be much use for punters if the features that they like to use are missing. As a result, I decided to have a brief look at the things you’ll be able to do with a Mobilebet account.

One of the biggest changes to take place in betting in recent years is the ability to Cash Out your bet. It’s essentially bookmakers giving you an opportunity to get away from a losing bet before it’s completely run it’s course or to let you get some winnings if it looks as though the bet might go wrong. Little wonder, then, that Mobilebet have it as one of their main features!

It’s slightly more complex to Cash Out your bet than with other bookies, mainly because the actual Cash Out function is hidden at the back of a few menus. You can Cash Out pretty much any single bet that you’ve placed on a sport, though if you can’t Cash Out a particular bet for some reason then you just won’t see the option to do so. It’s perhaps not as well done through Mobilebet as some of the big boys, but some bookies don’t offer it at all so it’s a marked improvement on them.

In many ways the ability to Cash Out a bet goes hand-in-hand with the ability to bet live on an event. That is to say, it’s unusual for a bookmaker to offer one but not the other and Mobilebet have gone along with that.

Their Live Betting is decent enough, though it would be true to say that their football coverage is much better than almost any other sport. There are other sports in there, though, so if you like to have a flutter on events as they develop then you’re in luck. 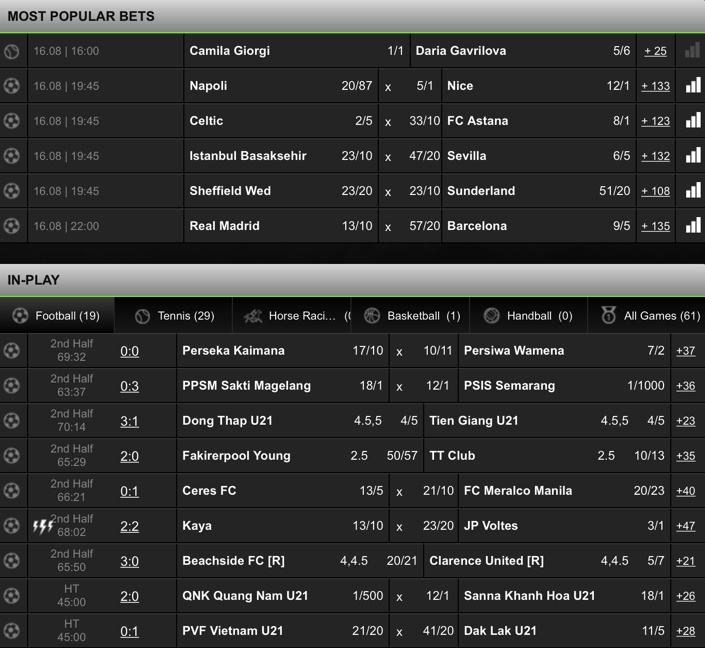 Mobilebet cover all of the usual sports that you’d expect to see from a major bookmaker, with the leaning towards football that they demonstrate with their Live Betting also evident in their sports coverage. You can bet on matches taking place in such exotic places as Japan, South Korea and Mexico, as well as in places closer to home like Scotland, Ireland and, of course, England. On top of that you can bet on the major competitions that take place either during the course of the regular season, like the Champions League, or in the summer, such as the World Cup or European Championships.

That’s not to suggest that other sports are not covered with a similar degree of depth, they are. It’s just that the company knows the sport most people in the UK like to bet on so they give it due consideration. Horse racing is another sport that a lot of folk like to have a flutter on, so you’ll find virtually all of the British and Irish racecourses are covered. As I type this I can place bets on races at courses such as Newbury, Limerick and Worcester, for example. I can also put on some ante-post bets on the likes of the Grand National.

I’m not going to say that Mobilebet cover every sport you could ever want to place a bet on, but they do cover the vast majority of them. The major sports like golf, tennis and cricket, but they also offer bets on much more random sports. These includes things such as Mixed Martial Arts, American football, trotting, handball and others. Whereas the football coverage is pretty much from any country you could imagine, the other sports tend to have bets available from the countries where said sport is most popular. That’s why something like volleyball turns to places such as Argentina and Vietnam.

Some bookmakers have sports that they cover better than others, whilst a lot of them tend to cover the majority of sports in as general way as they can. I tend to think of these as jack-of-all-trades bookies and I think they have just as much to recommend them as the the best-known bookies around. Mobilebet very much fits into this category, especially if you’re someone that enjoys betting on the go and you tend to use your mobile device a lot for the purpose.

As I mentioned at the start, Mobilebet is the sister company of ComeOn. As such, most of the details that apply to them also apply to Mobilebet. The parent company is Co-Gaming Limited and they’re located in Malta, the place the industry refers to as the ‘Silicon Valley of the iGaming world’. This might have something to do with the fact that Malta is one smallest members of the European Union and a lot of different bookmaking companies base themselves there for tax reasons.

Not that any of that makes a difference to how the companies work when it comes to their right to deal with clients based in the UK. Mobilebet has a gambling licence issued by the UK Gambling Commission, meaning your money is as safe as it can be. Co-Gaming Limited was formed as a going concern in 2010 and manager to get their gambling licence five years later, so they’ve been in the business for a decent amount of time by now. They haven’t got the name recognition of the bigger brands, but if they’re reliable and offer the sort of things you’re interested in, does that really matter all the much? Not for me, as I’ll always recommend you go with companies that have the features that appeal to you.