There are many things that I like about Betsafe, but the fact that they’re making clear exactly what they’re selling themselves as with their name is definitely one of them. Everything about them tells you that you’re in safe hands, from the moniker through to their excellent website. That’s not a shock, though, when you find out that they’re a member of the Besson Group. The Swedish company owns and operates a number of different online betting companies around Europe, so they’ve got enough experience to ensure that they do things properly.

They work hard to give themselves an edge in any area that they can find, knowing full well that it’s a competitive industry and even the slightest thing that makes a bettor’s life easier may well win them business. That’s why they’re consistently voted near to the top in polls regarding customer service. It might not be as important as good odds or loads of features, but to me it is suggestive of the fact that they’re putting the customer first and are keen to ensure that you get the service you deserve. 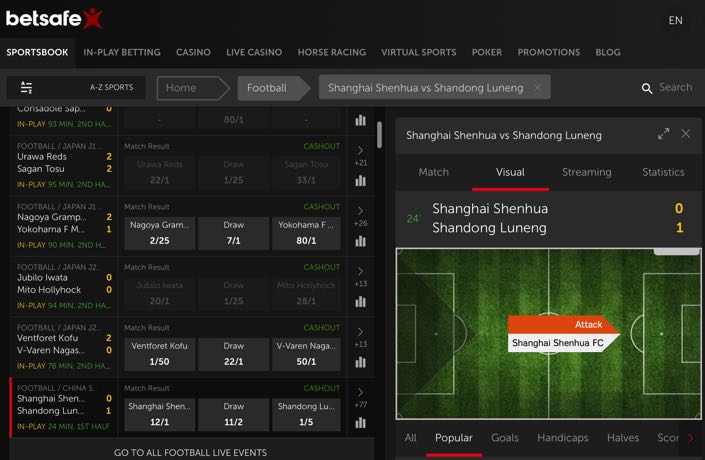 As I say, though, being able to chat to someone on an online chat is all well and good, yet it’s nothing compared to the ability to use a series of really good features. Here’s what you need to know about what you’ll be able to do with Betsafe.

Betsafe’s Live Betting is quite understated, which makes a pleasant change when compared to other bookies that opt for a somewhat more ostentatious approach to it all. On the sportsbook homepage you’ll find a couple of selected live events labelled front and centre, with a flashing ‘Live’ sign grabbing your attention. You can find events that are coming up in the same location, moving to them by clicking on a tab. There are also numerous ante-post bets on the most popular events of the moment that you’ll spot as you scroll down the page. That includes the likes of the Premier League or Champions League’s next games.

At the top of the page you’ll find a series of quick links, including links to the company’s casino, live casino and online poker. In amongst it all you’ll spot an ‘In-Play’ tab that will, unsurprisingly, transport you to Betsafe’s full page for live events. On the lefthand side of that page you can select the sport that you want to bet on in-play, with football dominating proceedings at the top.

Once you’ve selected your event it will take over the majority of the page, ensuring that you won’t have any difficulty finding the bet that you’re after if you’re looking for something particular. I must say that I found their coverage of live events to be particularly impressive. As well as British football, for example, you could also bet on far less mainstream events such as Brazilian Under-20s games, the Victorian Premier League in Australia and eleven different leagues in Sweden.

You can stream events through the Betsafe website, which is somewhat unusual for one of the lesser-known bookmakers. The problem is that they don’t make it particularly obvious which events are being streamed live or where you can find the live stream. Hopefully this is something that they’ll work on and it will be much better by the time you come to use the site.

Even if you can’t figure out how the live stream works then there’s still a fun infographic available for most sports. That’s something that you might want to check out and figure out how it works if you’re the sort of person that likes to take advantage of the Cash Out feature. They don’t offer it for everything, but they do have Cash Out available on most Win single bets that are placed ahead of the event getting underway or on bets placed In-Play. If you’re not sure then head to that brilliant Chat function I mentioned earlier and have a word with someone there; they’ll be able to tell you what you need to know. 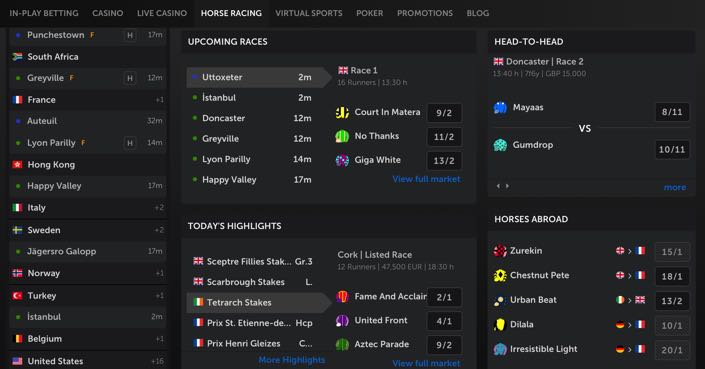 Another part of Betsafe’s excellent service is their coverage. There are twenty-seven different sports covered at the time of writing, to say nothing of TV events as well as both political and business bets. As you’ll probably have guessed from the amount of sports covered, we’re not just talking about the mainstream disciplines. I’m willing to bet that not many of you will have heard of bandy, for example, whilst the likes of Gaelic sports, mixed martial arts and speedway aren’t exactly the most popular sports in the United Kingdom.

That’s not to say that mainstream sports aren’t also covered. A bookmaker wouldn’t last long operating to a UK-based audience if they didn’t allow them to bet on football, after all. There are leagues from all around the world on offer, as well as the obvious selections like the Premier League and the Champions League. Away from football you might be interested in their tennis, cricket and rugby coverage. Winter sports are offered when the time of year allows it, with esports also running on a regular basis.

If you’ve had a look at Betsafe in the past and decided that they weren’t for you because of their lack of horse racing coverage then now might be a time to revisit the site. They’ve recently added horse racing to their list of sports, as well as greyhound racing. They don’t tend to do stuff in halves, either, so you’ll find blogs and tips on the horse-racing page to help you get started with you betting. The addition of the horse racing means that they’re now pretty comprehensive with their coverage, provided you don’t want to bet on really random stuff that would probably be referred to as ‘specialist’ by pretty much any bookmaker. If you want them to be solid and reliable then you’ll be pleased by what you find.

Betsafe itself was launched in 2006, so it’s not as if we’re talking about a new enterprise that has only just found its feet. They’ve gained the experience over the past decade and more to know what punters want from them, which is why they’ve garnered over half a million customers from more than one hundred countries around the world. They’ve managed to get their name out there by being the official betting partner of Manchester City, as well as bringing in former Tottenham Hotspur manager Harry Redknapp as a punter. They’re also the principal betting partner of Saracens, the rugby union club.

2006 might still sound quite recent to some of you but you needn’t worry; Betsafe’s parent company, the Betsson Group, has been in operation in one form or another since 1963. The company was originally named AB Restaurang Rouletter, later becoming Cherryföretagen AB, and was set up by two men named Bill Lindwall and Rolf Lundström. Interestingly they initially supplied slot machines to restaurants throughout Sweden, not branching out into the online gaming world until the acquisition of Net Entertainment in 1998. It wasn’t until 2003 that Cherryföretagen AB bought into the Betsson Group, which already had a licence to offer gaming in the UK. Nowadays they’re based in Malta, from where they operate numerous different websites and gaming companies.