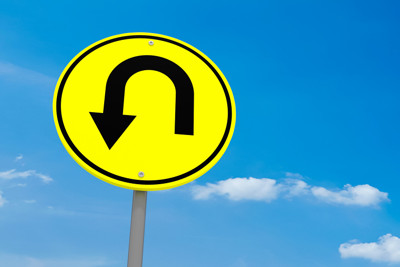 Few topics have dominated the gambling world in recent times quite like Fixed Odds Betting Terminals. Described as the ‘crack cocaine of gambling’, the machines have been a big part of discussions around gambling industry and role that the government has in curtailing the excesses of problem gamblers. I have written about them numerous times, with my most recent blog post exploring how the Sports Minister Tracey Crouch had resigned from her position in government after it was revealed that there was a plan to delay the implementation of the reduction in maximum stake that bettors can stake on the terminals.

It now appears that the government is doing a u-turn on its position, likely to be in no small part because of the objection of Crouch and other leading MPs. One of the biggest problems that the government faced in delaying the implementation of the new maximum stake came in the form of this being a cross-parliamentary issue, with members from both sides of the house being against the machines and keen for Theresa May and her cabinet to do what they can as soon as they can do stop the most vulnerable from financial harm. 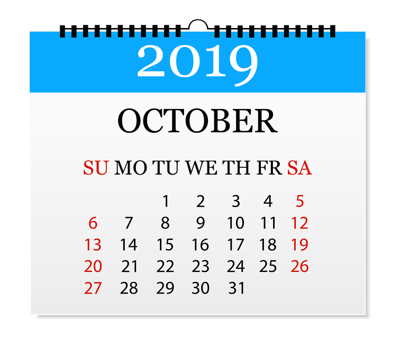 In his budget a week or so ago, the Chancellor of the Exchequer, Philip Hammond, said that the reduction in stake from £100 to £2 would take place in October of 2019. That was in spite of the fact that many people believed that the change to the maximum stake would occur in April, which was the next opportunity available to the government to implement its plan.

The decision to shift it until six months later in the year was likely taken because that’s when a new tax on online casinos was due to take place. The shortfall that the government will have to shoulder when the stake is reduced is likely to be around £1.15 billion, which is around the same amount as the government will make up by changing the tax on online casinos from 15% to 21%.

Despite the protestations of campaigners and MPs alike, the spokeswoman for Theresa May said at the end of October that the decision ‘has been made’ and therefore couldn’t be altered. It was seen as a betrayal of promises by many MPs, including the Labour deputy leader Tom Watson who said, “By rolling back on their promises, the government are allowing greed to triumph over good as the bookies trouser an additional £900m in revenue”. 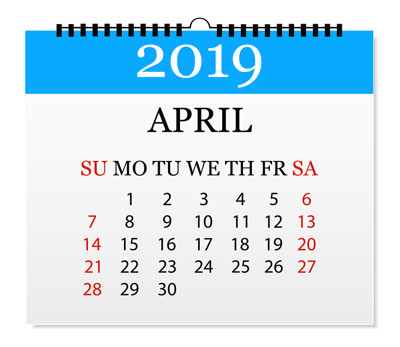 Today it was confirmed that the government will indeed introduce the cut to the maximum stake on Fixed Odds Betting Terminals from April 2019 instead of October, which is a major u-turn on their previous position on the matter. The change of heart comes about after numerous high profile politicians including Boris Johnson, Iain Duncan Smith and Justine Greening put forward amendments to the government’s finance bill in a bid to force an April introduction instead.

The Culture Secretary, Jeremy Wright, said that the increase to the Remote Gaming Duty, which is the tax paid by online gaming companies, will also be shifted to April rather than the planned date of October in order to allow the government to cover the shortfall that will come about because of the change. He put the decision down to the fact that the government had ‘listened’ to its critics on the matter and responded accordingly.

One such critic, Iain Duncan Smith, had used Prime Minister’s Questions to ask Theresa May why the delay had been suggested in the first place. He declared his ‘pride’ at the government’s decision to lower the maximum stake from £100 to £2 but then asked about the ‘hiatus’ around the decision of when the reduction would be taking place. Mrs. May responded by confirming that she was aware of the ‘strength of feeling’ on the matter and that gambling can ‘devastate lives’. Clearly that strength of feeling has led the Prime Minister and her cabinet to reverse course on the matter.

Why The Terminals Matter To The Economy

Part of the reason this has been a thorny topic for the government is that Fixed Odds Betting Terminals are actually really important to the country’s economy. First introduced back in 1999, there are more than thirty thousand of them in bookmakers’ shops around the country today. The money that they generate has always been impressive, but according to statistics from the Gambling Commission it has grown by more than 70% from around £1 billion in 2009 to just shy of £2 billion in 2017. 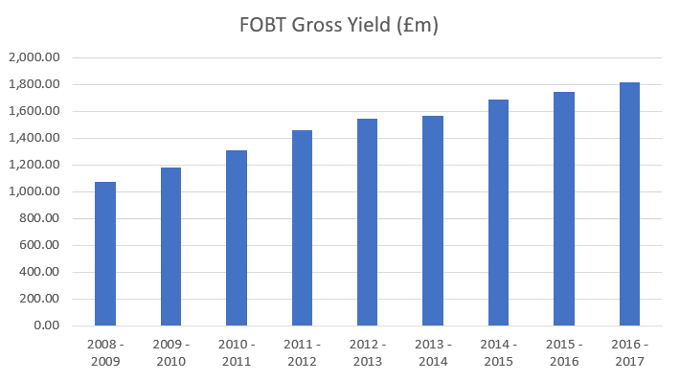 That lead to a combined return of in excess of £3 billion for bookies from both the FOBTs and the more traditional bets, with the terminals making up 57% of that figure. With many punters now turning to websites and mobile apps to place their bets, the machines have become one of the main ways that high street bookmakers have been able to come out on top.

Indeed, many in the industry have suggested that the cut in maximum stake to £2 will see shops having to close as they won’t be able to cover their overheads. However, the fact that they are seen as such a blight on communities is what led the government to begin looking at them back in October of 2016, speaking to industry experts and those campaigning against their usage in order to reach a sensible decision.

Many thought that the government would reduce the stake to £50 or £20, but few predicted the decision to go to the most drastic option available. The market seems to have approved of the latest news, though, with the shares of William Hill climbing by 2.23%. The owner of Ladbrokes-Coral, GVC Holdings, saw their shares climb by an even more dramatic 8% in the wake of the government’s announcement. That is in spite of the fact that the online side of the gambling industry is likely to be hit by a £100 million deficit because of the decision to move the increase in the Remote Gaming Duty forward too.

Too Late For Crouch 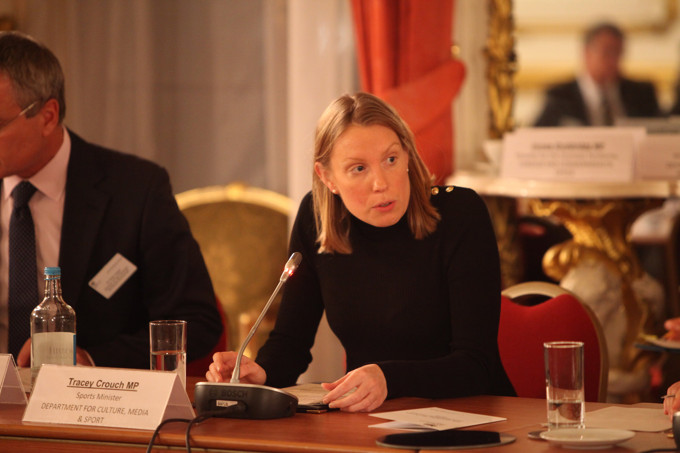 The decision comes too late in the day for Tracey Crouch, of course, who resigned her position as soon as it became evident that the government didn’t intend to introduce the reduction in maximum stake until October of next year. Asked whether she would look for a cabinet position now she said that there ‘wasn’t a vacancy’.

She confirmed her disappointment that it took so long for the government to see sense, saying, “I am sorry that my views as the minister in charge of the policy were not heard”. It says something about the government’s position on the matter that it took a potential defeat of its budget because of rebel MPs to get them to change their mind rather than the advice of the minister originally in charge of the matter.

On hearing the news that the reduction had been brought forward, Crouch released a statement which began “I am pleased that common sense has prevailed”:

My statement on the Government’s welcome decision to bring forward the implementation date for the reduction in FOBT stakes pic.twitter.com/uhgpMdpXzX

Crouch also found an ally from an unlikely source in the deputy leader of the opposition, Tom Watson. Speaking after confirmation of the government’s u-turn, Watson said, “It’s very sad that it took an honourable resignation of a good minister and a cross-party revolt to achieve the blindingly obvious”. He also referred to a ‘personal humiliation’ for Jeremy Wright, but reiterated that it was the right decision for the ‘thousands of people’ suffering because of gambling addition. Watson also pointed out that Labour were proud to be a part of what he referred to as a ‘cross-party campaign’ to attempt to reform gambling laws in the UK.

The Association Of British Bookmakers, meanwhile, decried the fact that thousands of jobs would be lost because of the decision. The ABB is of the belief that about four and a half thousand shops will close and more than twenty thousand people will lose their jobs as a result of the reduction in the maximum stake. Even so, a spokesperson confirmed that “Betting shops will comply with the timing that the government sets for the £2 stake implementation”. 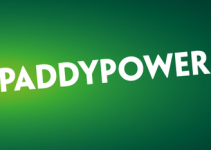 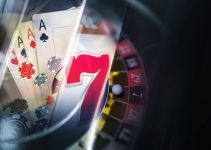