In my pre-match betting piece before the Wolves game at the weekend I said the Reds just needed to get a win on the board. Obviously that didn’t happen and we’ve now lost three on the bounce, seeing Fortress Anfield crumble and fall like a poorly built sandcastle. Sufficed to say it’s not what we needed heading into this match, with the Premier League leaders presumably licking their lips at the prospect of beating us for a fourth match in a row and equalling a record from 1923. 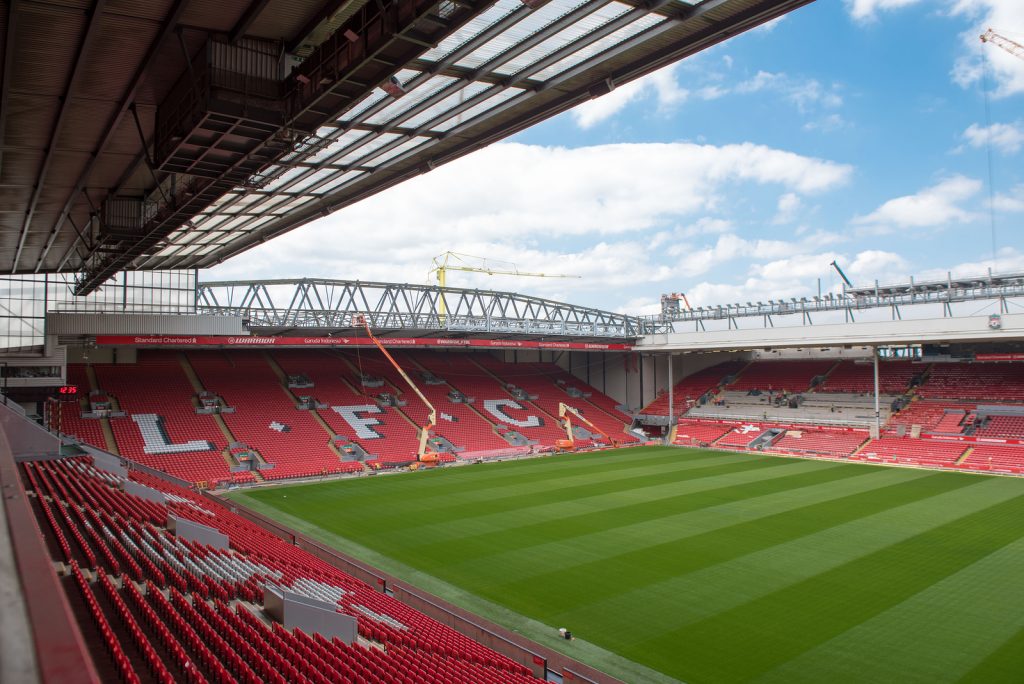 LIVERPOOL, ENGLAND – July 16th 2015: A view of Anfield, home to Liverpool Football Club with the new stand being erected in the foreground

Yet wouldn’t it be so very Liverpool to lose to lesser teams like Swansea City, Southampton and Wolverhampton Wanderers but pick up three points against Chelsea? It feels unlikely right now but stranger things have happened. If we get the win and then beat Hull at the weekend we could potentially be just four points behind Antonio Conte’s side and everything would look a little bit rosier. The team are down right now and I’m not expecting a fast start but there’s one thing I’m absolutely certain about: the crowd needs to do its bit at Anfield and get right behind the lads.

Let’s be honest, Klopp made a mistake with his starting line-up against Wolves. He can justify whichever way he wants but he got it wrong and we paid the price. The only good news is that he should have a virtually fully fit squad to choose from. Other than Danny Ings, who is out for the rest of the season, Mamadou Sakho, who appears to have been permanently assigned to the sin bin, and Marko Grujic who’s seemingly perpetually injured, everyone else is at least there or there abouts. Nathaniel Clyne is the only first XI doubt thanks to his ongoing rib injury.

The Clyne situation is presumably why Klopp decided to start Connor Randall at the weekend. Trent Alexander-Arnold would have been picked if the German wasn’t worried about him also picking up an injury and Clyne still being out. Once the decision has been made over who starts at right back the team pretty much picks itself depending on the formation that the manager chooses to go with. The biggest question that needs answering is regarding Sadio Mané. The club put on a private jet to fly him back from the African Cup of Nations, but is it too much of a risk to start him?

The Senegalese winger missed the decisive penalty when his side went up against Cameroon in the quarter-final of the competition on Saturday, so it’s anyone’s guess what mental state he’ll be in. That’s to say nothing of his physical preparation, having endured an eleven and a half hour flight. That said, we’ve missed him too much to be blasé about his appearance in our squad and I think Klopp will seriously consider starting him. The manager normally doesn’t do that with players who haven’t been in training but desperate times call for desperate measures. My starting XI: Mignolet – Alexander-Arnold – Matip – Lovren – Milner – Henderson – Can – Lallana – Coutinho – Firmino – Sturridge.

Antonio Conte’s only selection dilemmas involve which of his well-performing team get to start this game. Like his Anfield counterpart, the Italian made nine changes to his team for the visit of Brentford in the FA Cup at the weekend. Unlike for Liverpool all of them did the job and the home side ran out 4-0 winners. Pedro moved from the right-wing into a right-wingback slot in order to give Victor Moses a rest, scoring their second goal twenty minutes into the game. He’s likely to be pushed back into the forward slot for their trip to Anfield, however.

Their are many things that are necessary to win a Premier League title, including good players, determination and refereeing decisions going your way. One of the main ones, though, is keeping the core of your team fit and firing. Whilst Liverpool have had to cope without Coutinho, Matip, Mané and Henderson for long periods of time this season, Chelsea have barely had to worry about the size of their squad as the first XI have been available for selection for pretty much all of the campaign. That is going to be true for this game as well, so expect to see Costa leading the line and three-at-the-back. It’s a system that’s been working for them so it will take something special to stop that.

Liverpool have won just one game in eight attempts so far this season. That’s a miserable run and there’s no way of getting away from it. The only positive thing that we can hold onto heading into this one is that Jürgen Klopp’s got an excellent record against the rest of the top six. We’ve so far played six games against them in total and have taken twelve points, winning three matches and drawing the other three. One of those wins came against Chelsea at Stamford Bridge, so you suspect that no one in the home side’s dressing room will be throwing the towel in just yet.

Chelsea are the form team in the country, if not Europe right now. Their January results read LWWWW. They have lost just three Premier League games all season and have only drawn one, winning the other eighteen. That’s an insane run of form when you think about it and it’s no wonder the Reds find themselves ten points off them heading into this one. Aside from our victory over them at Stamford Bridge the other two they lost were against Arsenal at The Emirates and Tottenham at White Hart Lane. It’s not exactly conclusive, but they have struggled against top sides when on the road.

Things haven’t been going well for the Reds for some time now and it’s difficult not to wonder whether you’d be better off predicting us to lose. As an eternal optimist that’s not my style, so here are my main betting tips for this one:

Both Teams To Score?

All of the reports about Chelsea’s form this season have revolved around Antonio Conte’s decision to switch to his favoured three-at-the-back formation. They’ve also been pretty lethal in front of goal, though, so that’s something we’ll need to be wary of when the game gets underway. Thirteen goals in five games in all competitions in January is impressive, as are 47 goals in the ‘For’ column and only 15 in the ‘Against’. However Arsenal scored past them three times and Spurs got two, so they are vulnerable. Can we get at them?

I don’t fancy our chances of keeping a clean sheet so I think our best hope is going to be out-scoring them. You can get 4/1 for Both Teams To Score and Liverpool To Win, though even I think that might be wishful thinking. A more realistic punt might be on BTTS and a Draw, which is 3/1. It’s perfectly acceptable to disagree with me of course – everyone does. So if you think we’re going to put in the kind of gritty, solid defensive performance that won us the three points against Manchester City then Both Teams Not Scoring is Evens.

Who’ll Get The Goals?

Diego Costa is a terrible snide of a footballer, constantly trying to get people sent off and doing the sort of thing of the Luis Suarez rarely actually did but was always accused of. He’s a bad ted of a player but that doesn’t change the fact that he’s also very good at scoring goals. That probably explains why Costa is 6/5 to Score Anytime. His Chelsea teammate Eden Hazard is another cracking footballer who knows how to find the back of the net. He’s been slightly out of form lately but we’re vulnerable on the counter-attack and he’s the king of them. Hazard to Score Anytime at 9/4 looks very tempting. 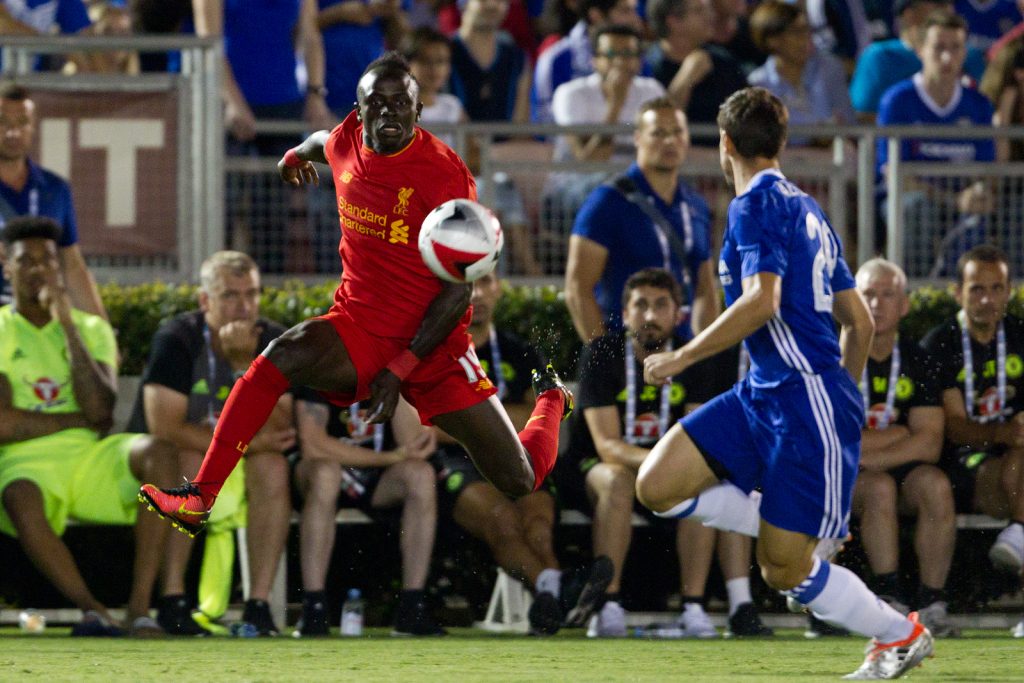 When it comes to Liverpool you have to hope that Jürgen Klopp has learnt his lesson about pushing Roberto Firmino out wide. The Brazilian is at his most dangerous when he’s playing through the middle and if we leave him there and ask Sturridge to play wide until, hopefully, Mané comes off the bench then we’ll be the better for it. Firmino is 2/1 to Score Anytime and if you fancy the Reds to get on the scoresheet then it’s difficult to look past him being the man to break the deadlock.

Mané To Return In Style?

There’s a huge narrative building up about Sadio Mané right now. Liverpool have missed him far more than is acceptable for a club of our standing, but the manager’s lack of transfer activity is a conversation for another time. Whilst it wouldn’t be a good sign for our dependency on him, what a conclusion to this current narrative it would be if the Senegalese international were to come off the bench and score the winner? Mané is 7/1 to Score the Last Goal and the storyteller in me really wants that to happen.

I’m going to go with two goalscorer as my chief tips this week. It pains me to say Chelsea are going to score but I think they are and I can see Hazard Scoring Anytime, which is 9/4. I also find myself leaning more and more towards the Mané Last Goalscorer narrative @ 7/1, so I’ll stick a tenner on that myself. 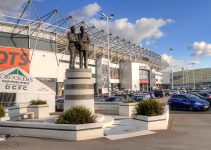