In my betting tips piece before the Bournemouth game I said that that felt like the most important game of the season so far. I’ll confess I didn’t foresee us losing from 3-1 up, but I did think that we looked like we’d dropped down a couple of gears in the previous few matches and needed to stay on top of our game to keep pace with Chelsea.

Now we sit four points behind them and how we respond to our unexpected set-back on the South coast is key to whether or not we’re seriously going to challenge for the title this season. West Ham are in a bit of a funk of their own at the moment so it’s hugely important that we put our foot on their throats and don’t take it off until Slaven Bilic is fired on the spot. But what’s the team news heading into Sunday’s game at Anfield?

In Jürgen Klopp’s pre-match press conference on Friday the manager confirmed that Daniel Sturridge remains sidelined for the visit of the Hammers this weekend. The England striker’s troubled injury history seemed as though it was behind him but a calf strain has kept him out of the team at a time when a player with his class could have really made a difference. The manager also said he won’t be available for the midweek trip to Middlesbrough and will be lucky to be back for the Merseyside derby.

Philippe Coutinho remains a medium-term absentee alongside long-term absentee Danny Ings, though Roberto Firmino, Adam Lallana, Sadio Mané and Joel Matip have all been declared fit and have been training this week. Klopp took the first-team on a jolly to Barcelona for a few days this week, though it was interesting to note that neither Sheyi Ojo nor Ben Woodburn went with them. A sign that they’ll return to the Under-23s rather than grace the bench at Anfield? Perhaps.

The return of Adam Lallana to a state where he’ll be able to start means that Klopp has a decision to make over the players in the attacking unit. Does he return to his favoured 4-3-3 with Firmino leading the line, or should he stick with Divock Origi up front given that the Belgian’s scored three in three? For my money the former is the better option but here’s what I think Klopp will do: Karius – Clyne – Matip – Lovren – Milner – Henderson – Can – Lallana – Firmino – Mané – Origi.

It’s been a tricky season so far for Slaven Bilic but he’ll be glad to see some of his players returning to fitness. Michail Antonio and Aaron Cresswell have both been out with groin strains but they’ve been training all week and are expected to start for the Hammers. Andy Carroll has also returned from another of his occasional injuries, so don’t be surprised to see him causing our defence all sorts of problems.

Cheikhou Kouyate is another player who’s been suffering with a groin problem but this match will come a little too soon for him. He joins James Collins, Reece Oxford and Diafra Sakho in the injury room and won’t be available. Bilic has been less than impressed with the performances of his previous number one Adrian, bringing in Randolph to replace him recently. There seemed to be outright revolt towards him from the Hammers’ defence in their 5-1 loss to Arsenal, however.

As I hinted at at the start of this piece, of late Liverpool haven’t been the all-guns blazing side that they were in the aftermath of the Burnley defeat all those weeks ago. We went fifteen games unbeaten in all competitions and threw in some genuinely top-class performances during that period, dispatching the likes of Arsenal and Chelsea along the way. We’ve been struggling recently, though, and our loss to Bournemouth felt like the de-railing of the juggernaut opposition fans wanted to see. It’s crucial to use this home match to get back on track.

Life is miserable for the Hammers just at the minute, there’s no doubt about it. They sit just a point off the relegation zone and could well be inside it by the time our game kicks off on Sunday afternoon. They’ve lost four of their last six, haven’t won any of them and conceded nine in their last two matches. They were beating Tottenham 2-1 in the 88th minute of the London derby but went on to lost 3-2; a sign of their current mental fragility perhaps. It’s worth remembering that their win at Anfield last season was their first in 43 league visits to us.

I said last week that a team with hopes of winning the title couldn’t be scared of playing Bournemouth. In the end we weren’t scared, we were just rubbish for the last twenty. We definitely can’t be scared or rubbish to play a struggling West Ham at home. Here, then, are my betting tips. 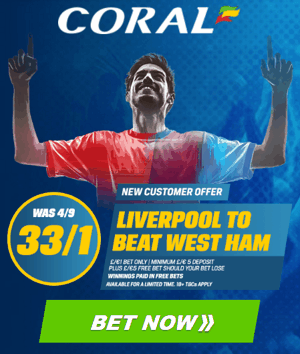 Before I give my tips proper I thought I’d just draw your attention to this cracking deal from Coral. They’re giving new customers enhanced odds of 33/1 for us to beat the Hammers on Saturday. It’s a maximum bet of £1, but that’s still a crazy deal considering the state that West Ham are in right now.

If you win then you’ll be paid in cash for the actual odds and the rest of your winnings will be topped up with free bets. What makes it an even more worthwhile deal is that if for some reason we don’t win the match then Coral will give you a £5 free bet! They had me at ‘free’ and ‘bet’, so I thought you might like to know about it too.

Full details and fine print can be found on this page of the Coral website.

Early Goal To Be Decisive

This feels like the sort of game where an early goal could be crucial to how the game goes in general. In his pre-match press conference Slaven Bilic said, “The four games after Liverpool are a good chance for us, but we are focused on Sunday’s game for now”, which says to me that he’s as good as accepted defeat in this one. If the Reds can get on the scoreboard early doors, then, it may well turn into a whitewash. West Ham’s players didn’t seem bothered against Man United or Arsenal so if we get more of the same then it could be a good afternoon on Merseyside.

The converse of that, of course, is that if West Ham score early then heads could go around Anfield. The players will worry that they’ve carried on where they left off against Bournemouth and the supporters will panic that another year’s title challenge has imploded in December. West Ham’s players, meanwhile will have something to defend. It’s 12/5 for Liverpool To Be Leading After 15 Mins and that looks like a decent bet to me. If you think there’ll be an early goal but aren’t convinced Liverpool will score it then the 7/4 available for A Goal From 0-15 will be for you.

Origi To Make It Four From Four?

Jürgen Klopp mentioned in his press conference that the players were angry. Angry that West Ham have got our points and angry that they collapsed against Bournemouth. I expect them to respond and I’m not sure that West Ham have got the mental fortitude to cope with a Liverpool onslaught. There’ll be goals, therefore, but who is going to score them? An obvious shout is Divock Origi and it’s 4/6 for the Belgian to Score Anytime. There’s not great value in that bet, however, so I’m more inclined towards the 4/1 you can get for Firmino To Score The First Goal.

Old players coming back to haunt us a common theme for Liverpool. We dodged a bullet when we avoided conceding one from Christian Benteke against Crystal Palace, but I’m not so sure we’ll avoid it a second time. Bournemouth players said after their win that they targeted the goalkeeper and I’m confident that West Ham plan to do the same. That makes the 3/1 available for Andy Carroll To Score Anytime the equivalent of printing money.

Finally, one of my chief tips for the Bournemouth game was for Joel Matip to score anytime. Obviously the Cameroonian failed a late fitness test and didn’t start at The Vitality, meaning that not only did he not score but the defence also fell apart in his absence. I expect him to show his importance to the team by coming back in and making us look solid again. I also think that 6/1 for Matip to Score Anytime looks like decent value.

Much like I expect the Reds to get back to winning ways, so I think this is the week when both of my chief tips will come good. Firstly I’m recommending that you take up the 7/4 available for A Goal From 0-15 as I don’t see this game being a slow burner. Secondly I’m putting a tenner on Andy Carroll to Score Anytime @ 3/1. Happy hunting!