Liverpool versus Manchester United is probably the biggest fixture in football. El Classico might have a shout at that, too, but we’re not in Spain so I’m giving the benefit of the doubt to England’s most fiery fixture. That José Mourinho is in the opposition dugout this time out merely serves to add an extra bit of spice to the match that Jürgen Klopp referred to as the ‘salt in the soup’ earlier this year.

Klopp is heading into the game on the back of being awarded the Premier League Manager of the Month award, whilst his captain Jordan Henderson won the Goal of the Month trophy for September for his spectacular strike against Chelsea at Stamford Bridge. Optimism is swirling around Anfield, but Mourinho knows how to spoil a party and will be gearing his players up to do just that. Here I have a look at the state of play for both teams as well as explore some pre-match bets that you might want to stick on before kick-off.

Jürgen Klopp kept his cards pretty close to his chest in his pre-match press conference. Adam Lallana went off the pitch during our match against Swansea with what looked like a hamstring problem, with Gini Wijnaldum suffering the same fate during Holland’s loss to France in a World Cup qualifying game during the international break. The manager said that neither were ‘ruled out’ for the game. Equally Dejan Lovren and Nathaniel Clyne, who missed their international duties with slight knocks, are both ‘in the race’ to be fit in time for Monday night.

Joe Gomez has returned to full training, with the Liverpool players applauding him as he ran onto the training pitch. A lovely touch for the youngster who is highly thought of around Melwood. He has a long way to go until he’s match fit, however, so don’t be expecting to see him on the bench against the Red Devils. One player who may be there, though, is Danny Ings. The striker has been scoring for fun for the Under 23s and has almost certainly earned a place as a substitute for the biggest home game of the year so far.

The biggest decision Klopp has to make is what to do about the goalkeeper. Loris Karius looked decidedly dodgy at dealing with crosses in the game against Swansea before the international break and Manchester United have a terrible combination of good set-piece takers and tall, powerful players to score from them. That said, Mignolet has never been brilliant at dealing with set-plays so it’s rock and a hard place stuff. My guess at a starting XI would be: Karius – Clyne – Lovren – Matip – Milner – Henderson – Can – Coutinho – Firmino – Mané – Sturridge. If Lallana is declared fit, however, swap him for Sturridge in that line-up.

There’s only one injury issue for José Mourinho to worry about, with Phil Jones still out with what the Portuguese manager is describing as ‘an important injury’. All of his players who left on international duty have returned without injury, with the only players José might think twice about using likely to be his South American trio of Sergio Romero, Marcos Rojo and Antonio Valencia.

Neither Chris Smalling nor Andre Herrera were called up for their countries during the international break, with Matteo Darmian also staying in Manchester last week. Juan Mata, Zlatan Ibrahimovic and Wayne Rooney did go away with their countries but are likely to start against the Reds. Henrikh Mkhitaryan appears to have recovered from the thigh injury that has stunted his start to his career in England, with Like Shaw also in contention for a start. The biggest question Mourinho has to answer will be surrounding his tactics. Does he play a physical game and start his ‘alehouse’ players like Marouane Fellaini, or does he try to go toe-to-toe with Liverpool and give his more talented players a run out?

Liverpool head into this game on the back of four Premier League wins in a row – something achieved for the first time under Jürgen Klopp’s management. Chuck in the 3-0 win over Derby County in the EFL Cup and it’s five consecutive wins. In fact, the Reds have only lost once in all competitions so far this season; not something to be sniffed at when you consider how difficult our fixtures have been up until now. The performances against Leicester, Chelsea, Derby and Hull were impressive, but we didn’t look great against Swansea City. Which Liverpool team will turn up on Monday night?

A similar question could be asked of Manchester United. The red Devils mirrored our scoreline against the Foxes, with the defending Premier League champions losing 4-1 at Old Trafford. That came off the back of a 3-1 loss to Watford in the league, sandwiched either side of a 3-1 win over Northampton in the cup. Their final game before the international break was a home match against Stoke that they looked set to win until former Red Joe Allen popped up with an equaliser in the dying minutes. Mourinho, his players and the United fans know how big this game is, though, so expect them to be well up for the battle when the whistle goes.

If United come to Anfield and try to play football then I fancy Liverpool to win reasonably easily. If they turn up and opt for the usual Mourinho negative tactics, however, it could be a long night for Reds. So which bets should you be looking to place before kick-off? 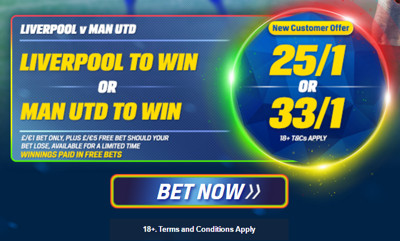 Coral have got a top-notch enhanced odds offer for new customers for the Liverpool v United game that you’ll want to take advantage of if you can. Place a £1 singles bet for either Liverpool or Manchester United to win the match and they’ll give you enhanced odds of £25/1 or £33/1 respectively. Now Mourinho loves to spoil a party as I’ve already said, but I’m not sure there’s any way that this match is ending in a draw so that seems like an incredible offer.

If you read the sports pages then you’ll know there’s been a little bit of a furore this week regarding the fact that the Football Association, in their wisdom, have decided to appoint Anthony Taylor as the match referee for Monday night. That’s the same Anthony Taylor who lives just six miles from Old Trafford and apparently ‘supports’ Altrincham, rather than the Premier League giants.

It somehow feels inevitable, then, that a refereeing decision will have a huge impact on this game and give us loads to talk about all week. It is 5/2 For The Match To Have A Penalty, which strikes me as long odds indeed. It’s also as long as 9/4 for there to be a Sending Off, another outcome that would surprise exactly nobody. If you want to be more specific then it’s 4/1 For A United Player To Be Sent Off and 11/2 For A Liverpool Player To See Red. If you really want a certain bet then it is Even Money For Fellaini To Get Booked.

As a Liverpool fan the biggest concern is United’s strength from set-pieces. Whether it’s Karius or Mignolet who start in goal I’m not sure either of them, to say nothing of our defence, have what it takes to be strong from corner and free-kicks against the likes of Pogba, Ibrahimovic and Fellaini. Sweden international Ibrahimovic is 2/1 To Score Anytime, whilst Fellaini is 7/1 To Score Anytime, so a little bet on both will almost certainly see you get your money back but might bring home even more.

The good thing for Liverpool is that the goalscoring threat is all over the park. David de Gea is one of the best goalkeepers in the world and has got in the heads of our players in the past. He’s not up against just one type of goalscorer this time out, however, so there are a couple of bets worth thinking about. Philippe Coutinho is 6/1 To Score First, something that might be worth a punt given his performance for Brazil in the international break. Roberto Firmino is 5/1 as FGS, Sturridge is 9/2.

For the last few weeks I’ve said that it’s only a matter of time until Joel Matip gets on the scoresheet, given that he’s looked dangerous for us from corners. I actually think he’s unlikely to do that this time as United look so big and strong, but the 10/1 For Matip To Score Anytime has got to be worth a cheeky pound or two. Mourinho’s tactics will dictate a lot of how this game pans out, but if the Reds are at the races and United are not then the 14/1 available for Liverpool To Win 3-1 might just come home.

I hate watching Liverpool play United, such are the stakes involved. For that reason I’m going to go conservative and suggest that Fellaini To Get Booked @ Evens is worthy of £10 of your money. I’m also going to go against type and recommend an opposition player to score. Zlatan Ibrahimovic is 2/1 To Score Anytime and I think that will earn you £20. 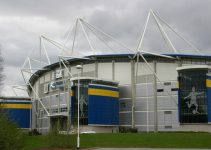